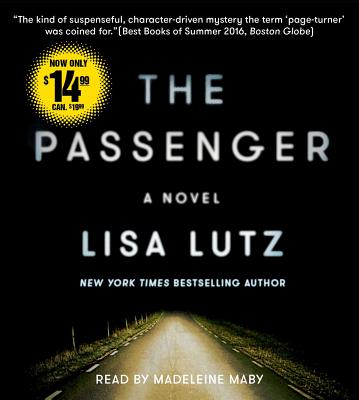 By Lisa Lutz, Madeleine Maby (Read by)
$14.99
Unavailable at this time.

“Thrilling and impossible to put down, this is the sharp, witty, and often sassy story of a woman, variously known as Norah/Jo/Tanya/Amelia/Debra/et al., on the run from events in her past for which she claims innocence. Her only chance of freedom is to run, and while running she changes identities and adds new troubles almost faster than readers can keep track. A meeting with a mysterious woman named Blue puts her on a new path, one that hopefully will lead her home and give her a chance to finally clear her name. Fast-paced and full of unexpected obstacles, this is a roller-coaster ride of a read you don't want to miss.”
— Nancy McFarlane (E), Fiction Addiction, Greenville, SC

“A dead-serious thriller (with a funny bone)” (The New York Times Book Review), from the author of the New York Times bestselling Spellman Files series, comes the story of a woman who creates and sheds new identities as she crisscrosses the country to escape her past.

Forty-eight hours after leaving her husband’s body at the base of the stairs, Tanya Dubois cashes in her credit cards, dyes her hair brown, demands a new name from a shadowy voice over the phone, and flees town. It’s not the first time.

She meets Blue, a female bartender who recognizes the hunted look in a fugitive’s eyes and offers her a place to stay. With dwindling choices, Tanya-now-Amelia accepts. An uneasy―and dangerous―alliance is born.

It’s almost impossible to live off the grid in the twenty-first century, but Amelia-now-Debra and Blue have the courage, the ingenuity, and the desperation, to try. Hopscotching from city to city, Debra especially is chased by a very dark secret. From heart-stopping escapes and devious deceptions, we are left to wonder…can she possibly outrun her past?

The Passenger’s white-knuckled plot and unforeseeable twists make one thing for certain: the ride will leave you breathless. “When the answers finally come, they are juicy, complex, and unexpected. The satisfying conclusion will leave readers rethinking everything and immediately turning back to the first page to start again. Psychological suspense lovers will tear through this thriller” (Library Journal, starred review).

Lisa Lutz is the author of the New York Times bestselling, Edgar Award– and Macavity Award–nominated, and Alex Award–winning Spellman Files series, as well as the novels How to Start a Fire, The Passenger, and The Swallows. She lives and works in upstate New York.