The Queen of the Night (MP3 CD) 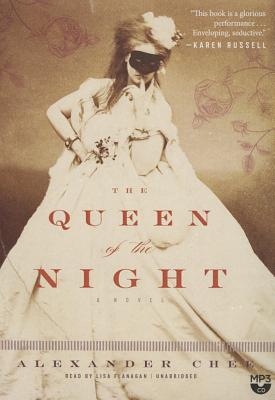 By Alexander Chee, Lisa Flanagan (Read by)
$44.95
Unavailable at this time.

“This historical novel about an opera singer is as grand and theatrical as opera itself. It is the story of a legendary soprano who looks back at her past to solve a mystery, but it is also a story of an artist and the road she takes to become one. Chee attempts the seemingly impossible -- to describe a soprano voice with words -- and he succeeds brilliantly, creating a tale that is vivid, intricate, and rich. Throw in cameos by figures like Verdi and George Sand, fascinating details about royal fashions, 19th century Paris, theater, and a circus, and the result is a perfect novel.”
— Anton Bogomazov, Politics & Prose Books and Coffee Shop, Washington, DC

From a writer praised by Junot Diaz as "the fire, in my opinion, and the light," comes a mesmerizing novel that follows one woman's rise from circus rider to courtesan to world-renowned diva.Lilliet Berne is a sensation of the Paris Opera, a legendary soprano with every accolade except an original role, every singer's chance at immortality. When one is finally offered to her, she realizes with alarm that the libretto is based on a hidden piece of her past. Only four could have betrayed her: one is dead, one loves her, one wants to own her. And one, she hopes, never thinks of her at all.As she mines her memories for clues, she recalls her life as an orphan who left the American frontier for Europe and was swept up into the glitzy, gritty world of Second Empire Paris. To survive, she transformed herself from hippodrome rider to courtesan, from empress' maid to debut singer, all the while weaving a complicated web of romance, obligation, and political intrigue. Featuring a cast of characters drawn from history, The Queen of the Night follows Lilliet as she moves closer to the truth behind the mysterious opera and the role that could secure her reputation--or destroy her with the secrets it reveals.