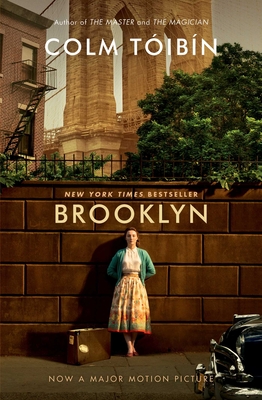 By Colm Toibin
$16.00
Unavailable at this time.

Eilis Lacey is one of the greatest young adult female characters I've read. Taking place in 1950's Ireland and Brooklyn, this coming of age tale quietly sneaks up to you leaving an unforgettable mark. This is one of the great novels about American immigration.

Read the book first ...then go see the movie!

“Eilis Lacey has come of age in the dark, impoverished Ireland of the 1950s. Trained as a bookkeeper but unable to find suitable work, she makes a new home in Brooklyn. Struggling to understand her new world and haunted by the old, she lives the classic immigrant story of loss and regret, hope and resilience. Brooklyn is a quiet tour de force.”
— Nan Hadden, Books Etc., Falmouth, ME

“One of the loveliest novels of 2009 now available in paperback: an Irish coming-of-age story that is both heartrending and full of hope. Toibin is a master.”
— Matthew Lage, Iowa Book L.L.C., Iowa City, IA

“Eilis Lacey has no apparent future in rural Ireland, and with the help of a priest makes her way to a Catholic enclave in Brooklyn. Uncanny in its evocation of a young woman coming of age, and of a city coming of age, Brooklyn is at once interior and ironic, distanced and involving. Toibin, who is masterful here in his depiction of Brooklyn and Ireland circa 1950, and of such issues as self determination, love of country, love of family, and, of course, sexual love. Perfect for book groups!”
— Betsy Burton, The King's English, Salt Lake City, UT

“One of the most unforgettable characters in contemporary literature” (Pittsburgh Post-Gazette), Eilis Lacey has come of age in small-town Ireland in the hard years following World War Two. When an Irish priest from Brooklyn offers to sponsor Eilis in America, she decides she must go, leaving her fragile mother and her charismatic sister behind.

Eilis finds work in a department store on Fulton Street, and when she least expects it, finds love. Tony, who loves the Dodgers and his big Italian family, slowly wins her over with patient charm. But just as Eilis begins to fall in love, devastating news from Ireland threatens the promise of her future.

Author “Colm Tóibín…is his generation’s most gifted writer of love’s complicated, contradictory power” (Los Angeles Times). “Written with mesmerizing power and skill” (The Boston Globe), Brooklyn is a “triumph…One of those magically quiet novels that sneak up on readers and capture their imaginations” (USA TODAY).

Colm Tóibín is the author of ten novels, including The Magician, winner of the Rathbones Folio Prize; The Master, winner of the Los Angeles Times Book Prize; Brooklyn, winner of the Costa Book Award; The Testament of Mary; and Nora Webster, as well as two story collections and several books of criticism. He is the Irene and Sidney B. Silverman Professor of the Humanities at Columbia University and has been named as the Laureate for Irish Fiction for 2022–2024 by the Arts Council of Ireland. Three times shortlisted for the Booker Prize, Tóibín lives in Dublin and New York.

“A classical coming-of-age story, pure, unsensationalized, quietly profound… There are no antagonists in this novel, no psychodramas, no angst. There is only the sound of a young woman slowly and deliberately stepping into herself, learning to make and stand behind her choices, finding herself.”
— Pam Houston, O, the Oprah Magazine

“Reading Tóibín is like watching an artist paint one small stroke after another until suddenly the finished picture emerges to shattering effect…. Brooklyn stands comparison with Henry James’s The Portrait of a Lady.”
— The Times Literary Supplement (U.K.)

"[A] triumph… One of those magically quiet novels that sneak up on readers and capture their imaginations."
— USA Today