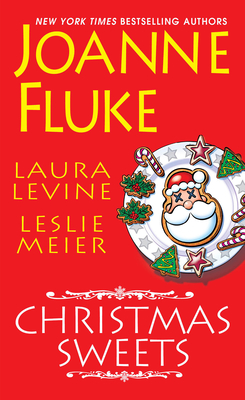 By Joanne Fluke, Laura Levine, Leslie Meier
$8.99
On our shelves now at one or more of our stores

Kick back with something sweet and indulge in three bite-sized Yuletide tales too good to resist! The unstoppable bestselling cozy mystery trio Joanne Fluke, Laura Levine and Leslie Meier team up for the yummiest holiday treat of the year--a special Christmas collection featuring three delectable mysteries.

Gathered in one volume for the very first time, here are three Yuletide tales of mystery, murder, and romance, featuring your favorite sleuths...

The Twelve Desserts of Christmas by Joanne Fluke
It's the perfect mix of naughty and nice when two lovestruck boarding school teachers watch six kids over Christmas break. But when someone wants the cozy couple's romance to burn out faster than a scorched fruitcake, it's Hannah Swensen to the rescue, armed with her sleuthing skills--and twelve deliciously festive recipes...

Nightmare of Elf Street by Laura Levine
Aside from the mortifying costume, how bad can a gig as a mall Santa's elf be? Jaine Austen finds out when she's teamed up with the Santa from Hell. But things go from bad to worse when he's found murdered on the job--and Jaine is a suspect. Now all she wants for Christmas is to find the real killer...

The Christmas Thief by Leslie Meier
Elizabeth Stone is ready for a white Christmas in Tinker's Cove, Maine--until a fancy Yule ball at the Florida hotel where she works dumps snow on her plans. The sponsor's jewels have gone missing and the police are asking about her ties to a cute mystery guest. Good thing Elizabeth's mother, Lucy Stone, flew down to surprise her. 'Tis the season for a little investigating...

Joanne Fluke is the New York Times bestselling author of the Hannah Swensen mysteries, which include Double Fudge Brownie Murder, Blackberry Pie Murder, Cinnamon Roll Murder, and the book that started it all, Chocolate Chip Cookie Murder. That first installment in the series premiered as Murder, She Baked: A Chocolate Chip Cookie Mystery on the Hallmark Movies’ Mysteries Channel. Like Hannah Swensen, Joanne Fluke was born and raised in a small town in rural Minnesota, but now lives in Southern California. Please visit her online at www.JoanneFluke.com.

Laura Levine is a comedy writer whose television credits include The Bob Newhart Show, Laverne & Shirley, The Love Boat, The Jeffersons, Three's Company, and Mary Hartman, Mary Hartman. Her work has been published in The Washington Post and The Los Angeles Times. She lives in Los Angeles, and is currently working on the next Jaine Austen mystery. Readers can reach her at Jaineausten@aol.com, or her website: www.JaineAustenMysteries.com.

Leslie Meier is the New York Times bestselling author of over twenty Lucy Stone mysteries and has also written for Ellery Queen's Mystery Magazine. She is currently at work on the next Lucy Stone mystery. Readers can visit her website at www.LeslieMeier.com