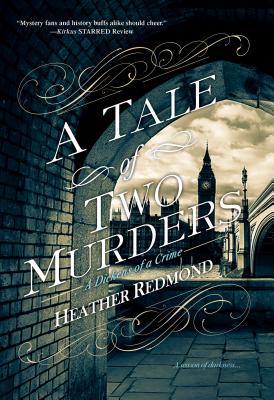 This is book number 1 in the A Dickens of a Crime series.

On the eve of the Victorian era, London has a new sleuth . . .

In the winter of 1835, young Charles Dickens is a journalist on the rise at the Evening Chronicle. Invited to dinner at the estate of the newspaper's co-editor, Charles is smitten with his boss's daughter, vivacious nineteen-year-old Kate Hogarth. They are having the best of times when a scream shatters the pleasant evening. Charles, Kate, and her father rush to the neighbors' home, where Miss Christiana Lugoson lies unconscious on the floor. By morning, the poor young woman will be dead.

When Charles hears from a colleague of a very similar mysterious death a year ago to the date, also a young woman, he begins to suspect poisoning and feels compelled to investigate. The lovely Kate offers to help—using her social position to gain access to the members of the upper crust, now suspects in a murder. If Charles can find justice for the victims, it will be a far, far better thing than he has ever done. But with a twist or two in this most peculiar case, he and Kate may be in for the worst of times . . .

Though her last known British ancestor departed London in the 1920s, Heather Redmond is a committed anglophile, Dickens devotee, and lover of all things nineteenth century. She has lived in Illinois, California, and Texas, and now resides in a small town in Washington State with her husband and son.

“Watching young Charles sniff out the connection between the two deaths is only part of the fun. Readers can…travel through a historical London that's vivid without being overcrowded with detail. Each character's voice is distinctive and appropriate to the period…Mystery fans and history buffs alike should cheer.” —Kirkus Reviews STARRED REVIEW

“Redmond deftly transforms a young Charles Dickens and his future wife, Kate Hogarth, into Victorian sleuths in this first installment of a new series. With meticulous attention to historical details and the known elements of Dickens’s life, A Tale of Two Murders unfolds a complex mystery that cunningly explores how Dickens might have been inspired to write the plot of his most well-known book, A Tale of Two Cities. Sharp, incisive, and delightfully twisty. I’m sure I won’t be the only reader exclaiming, ‘What the Dickens?!’”
—Anna Lee Huber, bestselling author of the Lady Darby Mysteries

“One suspects that Mr. Dickens himself would thoroughly enjoy this literary play on his early life and sleuthing abilities. Great fun to read!”
—Catherine Lloyd, author of the Kurland St. Mary Mysteries

“For Dickens fans, this charming little puzzler will prove a delight.”
—Booklist

“The details of the author’s life and the Victorian world stand out…Dickens fans will appreciate the foreshadowing of future writings and the warm family environment at the Hogarth household. Readers who enjoy the historical details in Anne Perry’s Victorian mysteries may want to try this series debut.”
—Library Journal

"A Tale of Two Murders is an all-over twisty read and a Dickens of a good mystery!"
—Julie Mulhern, USA TODAY bestselling author of The Country Club Murders

“With the mystery-weaving skill of Anne Perry and the tone of Dickens, Heather Redmond's A Tale of Two Murders mixes raw suspense with flirtatious banter in a fast-paced historical mystery that keeps us guessing through a tour of 1830s London.”
—Ransom Stephens, author of The Sensory Deception

“For Dickens fans, this charming little puzzler will prove a delight.”
—Booklist