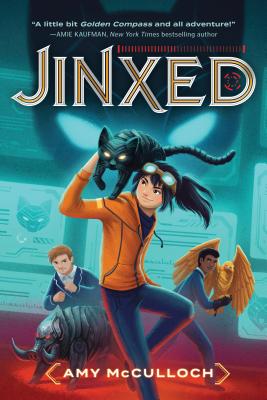 By Amy McCulloch
$16.99
On our shelves now at one or more of our stores

This book was so much fun! It's set in a futuristic world where everyone has a "baku", which is like a smart phone but shaped like an animal that is the perfect, little companion. Lacey Chu dreams of one day working for MONCHA, the huge tech firm behind Bakus, and to do so she needs to get into the prestigious Profectus Academy. However, Lacey can only afford a Level 1 Baku that isn't good enough to get into the Academy. But then Lacey stumbles upon a broken cat baku that's surprisingly advanced and she suddenly finds herself accepted into the Academy of her dreams. And thus begins a fun adventure full of twists and turns as Lacey meets friends and enemies at her new school, puts her mechanic skills to the test with baku battle training and discovers that this little cat baku she found might actually be a part of something much bigger than she ever could have expected.

The Golden Compass meets the digital age When a coding star enters an elite technology academy, she discovers a world of competition, intrigue, and family secrets--plus a robotic companion that isn't what it seems.

Lacey Chu is a girl who codes. She has always dreamed of working as an engineer for MONCHA, the biggest tech firm in the world and the company behind the baku--a customizable pet with all the capabilities of a smartphone. But when Lacey is rejected by the elite academy that promises that future, she's crushed.

One night, Lacey comes across the broken form of a highly advanced baku. After she repairs it, the cat-shaped baku she calls Jinx opens its eyes and somehow gets her into her dream school. But Jinx is different than any other baku she's ever seen...He seems real.

As Lacey settles into life at school, competing with the best students in a battle of the bakus that tests her abilities, she learns that Jinx is part of a dangerous secret. Can Lacey hold on to Jinx and her dreams for the future?

With a sharp eye toward the rising awareness of device addiction and a keen sense of wonder, McCulloch's tale is a feast for the imagination that celebrates women in STEM fields.--Publisher's Weekly, STARRED review