From the Cutting Room of Barney Kettle (Compact Disc) 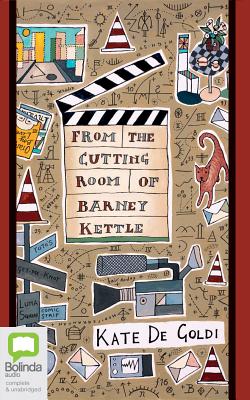 By Kate Goldi, David Vatousios (Read by)
$59.97
Unavailable at this time.

Barney Kettle knew he would be a very famous film director one day, he just didn't know when that day would arrive. He was already an actual director--he'd made four fifteen-minute films--but so far only his schoolmates and the residents of the High Street had viewed them. Global fame was a little way off. It would come, though. Barney was certain about that....

So begins the manuscript written from the hospital bed of an unnamed man.

He has written it over many months as he recovers from serious injuries sustained in a city-wide catastrophe.

He has written so he can remember the street where he lived, home to a cavalcade of interesting people, singular shops, and curious stories.

He has written so he can remember the summer before he was injured, the last days of a vanished world.

Above all, he has written so he can remember the inimitable Barney Kettle, filmmaker, part-time dictator, questing brain, theatrical friend; a boy who loved to invent stories but found a real one under his nose; a boy who explored his neighbourhood with camera in hand and stumbled on a mystery that changed everything....

From the Cutting Room of Barney Kettle is a beautiful story: big-hearted, richly entertaining, powerful.