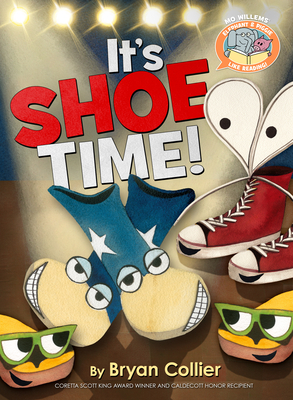 This is book number 4 in the Elephant & Piggie Like Reading! series.

Searching for your next favorite beginning reader? Look no further than this clever, joke-filled book about a girl picking out a pair of shoes for a "Daddy-and-Me Day." Her unexpected choice has her anthropomorphic shoes worried that she's made a big mistake (though she's confident in her decision). Her unconventional choice is in fact deliberate and makes for a rather sweet moment between father and daughter. It's a sho(e)-in!

This lyrical beginning-reader by multi award-winning artist Bryan Collier turns the closet on its heel and redefines what it means to be a pair. Beautifully rendered art paired with rich, rhyming dialog creates a powerful reading experience.

Bryan Collier is an American writer and illustrator known best for illustrating children's books. He won both the Coretta Scott King Award, as illustrator, and the Ezra Jack Keats New Illustrator Award for UPTOWN, the first book he both wrote and illustrated. He has won six King Awards as illustrator and he is a four-time Caldecott honor recipient. For his lifetime contribution as a children's illustrator, Collier was a U.S. nominee for the biennial, international Hans Christian Andersen Award in 2014.