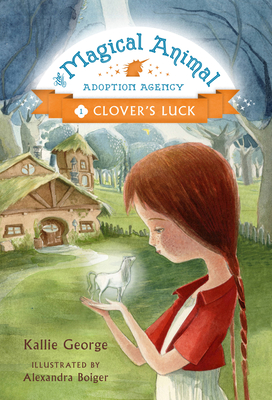 This is book number 1 in the The Magical Animal Adoption Agency series.

Despite her name, Clover has always felt decidedly unlucky. So when she stumbles upon a mysterious cottage in the Woods, she can hardly believe her good fortune. It's the Magical Animal Adoption Agency, and it houses creatures of all kinds. Fairy horses, unicorns, and a fiery young dragon are just the beginning!

Mr. Jams, the Agency's owner, agrees to hire her as summer helper and Clover hopes her luck has finally changed. But when she's left alone to care for the Agency, a sneaky witch comes after the magical creatures! Will Clover outsmart her in time to protect the animals?

The first installment in a new illustrated chapter book series by Kallie George, featuring enchanting illustrations by Alexandra Boiger, will charm young readers as Clover learns that courage and heart can be even more powerful than good luck.

"[This] gentle tale of magic and self-reliance will entertain confident new independent readers. Clover's sweet story is a good next step for lovers of the Magic Tree House."—Kirkus Reviews

"The first novel in George's new series is a charming story, delicately written, with a winning heroine. Clover's first adventure with the magical animals at the agency comes to a conclusion that will satisfy young readers."—Booklist Online