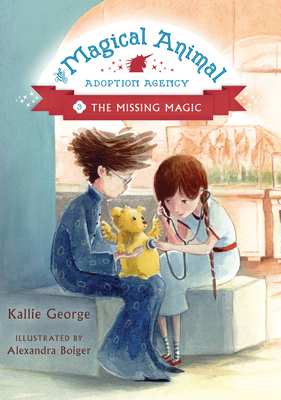 This is book number 3 in the The Magical Animal Adoption Agency series.

A new volunteer has joined the Magical Animal Adoption Agency, and Clover's not too happy about it! Oliver Von Hoof is supposed to be an expert on magical animals, but he's barely older than Clover. How can he be an expert on anything? And it doesn't help that Mr. Jams keeps turning to Oliver instead of Clover for help with the animals.

When Mr. Jams is called away from the Agency on a secret mission, Clover and Oliver are put in charge of the Agency once again. But when Picnic the invisible puppy starts turning visible, and the Agency's green cat, Dipity, begins to look white, Clover and Oliver realize that all of the amazing creatures are becoming ordinary. Even Oliver's trusty magical wands aren't enough to cure them! Will Oliver and Clover learn to work together in time to restore the animals' magical powers?

Alexandra Boiger's delightful illustrations shine in the third book of Kallie George's The Magical Animal Adoption Agency series where an open heart can best the nastiest of spells.

"[This] gentle tale of magic and self-reliance will entertain confident new independent readers. Clover's sweet story is a good next step for lovers of the Magic Tree House." -- Kirkus Reviews

"Readers will be envious of the world of magic that Clover becomes ensconced in and eager to read future installments." -- Publishers Weekly

"The first novel in George's new series is a charming story, delicately written, with a winning heroine. Clover's first adventure with the magical animals at the agency comes to a conclusion that will satisfy young readers." -- Booklist Online

"Clover is a winning hero worth following." -- Library Media Connection

PRAISE FOR THE ENCHANTED EGG


"Graduates of sparkly chapter-book series will be right at home and looking for the next installment posthaste."
—Kirkus Reviews

PRAISE FOR THE ENCHANTED EGG

"[T]he gentle but intrepid Clover continues to charm."—Bulletin of the Center for Children's Books