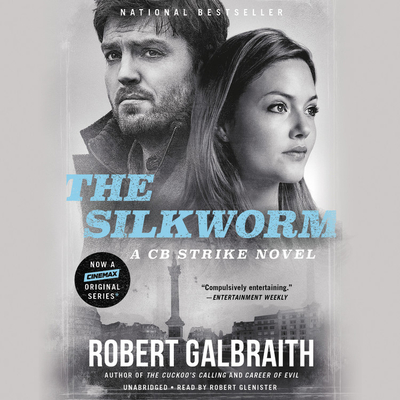 By Robert Galbraith, Robert Glenister (Read by)
Unavailable at this time.
Unavailable

"Cormoran Strike is back, and so is his resourceful sidekick, Robin
Ellacott, a gumshoe team that's on its way to becoming as celebrated for
its mystery-solving skills as Nick and Nora Charles of "Thin Man" fame,
and Mikael Blomkvist and Lisbeth Salander (a.k.a. the girl with the
dragon tattoo)."—Michiko Kakutani, The New York Times

"Why is "likable" the first word that comes to mind upon finishing The Silkworm? Surely, that has something to do with Rowling's palpable pleasure in her newly chosen genre (the jig may be up with her Robert Galbraith pseudonym, but the bloom is still on her homicidal rose) and even more to do with her detective hero, who, at the risk of offending, is the second husband of every author's dreams."—Louis Bayard, The Washington Post

"The story is enthralling, not only for its twists and turns, but for the fun of the teamwork.... [It's] a cast of characters who you'll want to meet again and again."—Ashley Ross, Time

"Bring on the next one, please....Galbraith writes with wit and affection for detective-novel tradition (it's impossible not to see her central duo as a modern-day Nick and Nora, minus the marriage), and races us through a twisty plot so smoothly that you won't notice as the hours tick by."—Moira MacDonald, The Seattle Times