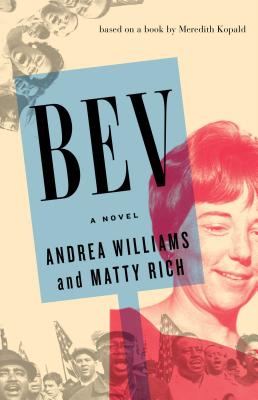 Based on the real life story of a little-known figure in the Civil Rights Movement: a white social worker who left the comforts of her life in New York City to travel to the segregated South, comes BEV, a fictionalized account of the strength, compassion, and dangers people faced in their fight to help African Americans achieve equality.

After watching the horrifying images of dogs, hoses, and violence on March 7, 1965 a.k.a Bloody Sunday, Bev Luther, a white Northerner, determined she could no longer afford to remain a spectator. As a social worker, she knew she was needed to help and march alongside African Americans, Asians, and Latinos in the quest for equality. Along with several other Northerners—mostly whites—she decided to travel down to the tense segregated South right in the middle of an era that would change America forever.

With a clear understanding of history and evocative language, BEV is the fictionalized account of those who answered the call to help their fellow citizens earn the right to vote.

Andrea Williams is an author, journalist and editor who's always on the lookout for the next great story. Though currently residing in Nashville, Tennessee with her husband and four children, Andrea's heart will always remain in her hometown of Kansas City, Missouri, where it feasts constantly on Kansas City Royals baseball and Gates & Sons Barbecue.

Matty Rich is a video game executive and filmmaker whose critically acclaimed 1991 breakout film Straight Out of Brooklyn won many awards, including the Independent Spirit Award.