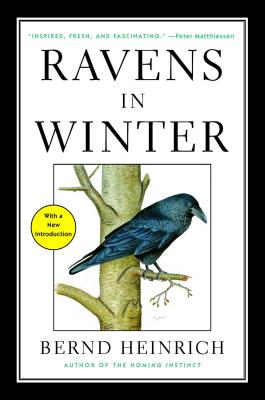 “One of the most interesting discoveries I’ve seen in animal sociobiology in years.” —E.O. Wilson

Why do ravens, generally understood to be solitary creatures, share food between each other during winter? On the surface, there didn’t appear to be any biological or evolutionary imperative behind the raven’s willingness to share. The more Bernd Heinrich observed their habits, the more odd the bird’s behavior became. What started as mere curiosity turned into an impassioned research project, and Ravens In Winter, the first research of its kind, explores the fascinating biological puzzle of the raven’s rather unconventional social habits.

“Bernd Heinrich is no ordinary biologist. He’s the sort who combines formidable scientific rigor with a sense of irony and an unslaked, boyish enthusiasm for his subject, and who even at his current professorial age seems to do a lot of tree climbing in the line of research.” —David Quammen, The New York Times

Bernd Heinrich, Professor Emeritus of Biology at the University of Vermont, is the author of numerous books, including Bumblebee Economics, Mind of the Raven, and The Homing Instinct. He has received the John Burrough’s Medal for Nature Writing and has been nominated for a National Book Award for Science. He lives in Vermont.