We Are Not Ourselves (Paperback) 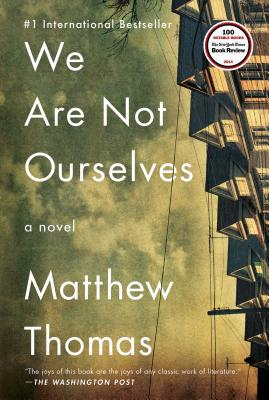 I have long been a fan of debut novels. The pleasure of discovering a new writer, someone with a fresh voice, a new way of telling the story is one not to be missed. We Are Not Ourselves is the first novel from Matthew Thomas and it is a stunning, emotionally devastating and redemptive story of three generations of an immigrant Irish family. Eileen, the mother is the child of an alcoholic father and has dreams of escaping her Queens childhood for a bigger piece of the American Dream. When she finds Ed, she thinks she has found her ticket. It doesn't work that way. We Are Not Ourselves is profoundly moving, sad in ways that moved me to tears and yet oddly redemptive as it points us to what is truly important in life. This is not to be missed.

New York Times 100 Notable Books of 2014 * Washington Post Top 50 Fiction List for 2014 * Entertainment Weekly Ten Best Fiction Books of 2014 * Esquire 5 Most Important Books of 2014 * Publishers Weekly Best Books of 2014 * One of Janet Maslin's Ten Favorite Books of the Year in The New York Times The instant New York Times bestseller The Washington Post calls a "stunning...superbly rendered" novel, and Entertainment Weekly describes as "a gripping family saga, maybe the best...since The Corrections." Born in 1941, Eileen Tumulty is raised by her Irish immigrant parents in Woodside, Queens, in an apartment where the mood swings between heartbreak and hilarity, depending on how much alcohol has been consumed. From an early age, Eileen wished that she lived somewhere else. She sets her sights on upper class Bronxville, New York, and an American Dream is born. Driven by this longing, Eileen places her stock and love in Ed Leary, a handsome young scientist, and with him begins a family. Over the years Eileen encourages her husband to want more: a better job, better friends, a better house. It slowly becomes clear that his growing reluctance is part of a deeper, more incomprehensive psychological shift. An inescapable darkness enters their lives, and Eileen and Ed and their son Connell try desperately to hold together a semblance of the reality they have known, and to preserve, against long odds, an idea they have cherished of the future. Described by The New York Times Book Review as "A long, gorgeous epic, full of love and caring...one of the best novels you'll read this year," We Are Not Ourselves is a testament to our greatest desires and our greatest frailties. Through the lives of these characters, Thomas charts the story of the American Century. The result is, "stunning...The joys of this book are the joys of any classic work of literature--for that is what this is destined to become--superbly rendered small moments that capture both an individual life and the universality of that person's experience" (The Washington Post).