The Short and Tragic Life of Robert Peace: A Brilliant Young Man Who Left Newark for the Ivy League (Hardcover) 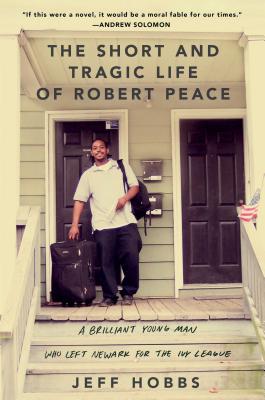 “On one level, The Short and Tragic Life of Robert Peace is about unfulfilled potential and heartbreaking loss, but more importantly, it deals with the pressure we all feel to succeed and be happy in an increasingly competitive society. It is a beautiful eulogy to a friend and an accurate portrayal of what it means to be young, talented, and conflicted.”
— Shawn Donley, Powell's Books, Inc, Portland, OR

A heartfelt, and riveting biography of the short life of a talented young African-American man who escapes the slums of Newark for Yale University only to succumb to the dangers of the streets—and of one’s own nature—when he returns home.

When author Jeff Hobbs arrived at Yale University, he became fast friends with the man who would be his college roommate for four years, Robert Peace. Robert’s life was rough from the beginning in the crime-ridden streets of Newark in the 1980s, with his father in jail and his mother earning less than $15,000 a year. But Robert was a brilliant student, and it was supposed to get easier when he was accepted to Yale, where he studied molecular biochemistry and biophysics. But it didn’t get easier. Robert carried with him the difficult dual nature of his existence, “fronting” in Yale, and at home.

Through an honest rendering of Robert’s relationships—with his struggling mother, with his incarcerated father, with his teachers and friends and fellow drug dealers—The Short and Tragic Life of Robert Peace encompasses the most enduring conflicts in America: race, class, drugs, community, imprisonment, education, family, friendship, and love. It’s about the collision of two fiercely insular worlds—the ivy-covered campus of Yale University and Newark, New Jersey, and the difficulty of going from one to the other and then back again. It’s about poverty, the challenges of single motherhood, and the struggle to find male role models in a community where a man is more likely to go to prison than to college. It’s about reaching one’s greatest potential and taking responsibility for your family no matter the cost. It’s about trying to live a decent life in America. But most all the story is about the tragic life of one singular brilliant young man. His end, a violent one, is heartbreaking and powerful and unforgettable.

Jeff Hobbs graduated with a BA in English language and literature from Yale in 2002, where he was awarded the Willets and Meeker prizes for his writing. He is the author of The Short and Tragic Life of Robert Peace and The Tourists. He lives in Los Angeles with his wife and two children.

“Mesmeric... [Hobbs] asks the consummate American question: Is it possible to reinvent yourself, to sculpture your own destiny?... That one man can contain such contradictions makes for an astonishing, tragic story. In Hobbs’s hands, though, it becomes something more: an interrogation of our national creed of self-invention.... [The Short and Tragic Life of Robert Peace] deserves a turn in the nation’s pulpit from which it can beg us to see the third world America in our midst.”
— The New York Times Book Review

"Many institutions that provide bridges to realization of The American Dream conflate the aspirant’s yearning to participate fully with a desire to leave everything behind. The Short and Tragic Life of Robert Peace reveals the devastating consequences of this assumption. There are few road maps for students who carry our much-valued diversity, and few tools for those who remain ignorant of the diverse riches in their midst. Jeff Hobbs has made an important contribution to the literature for all of us. He shows what high quality journalism can aspire to in its own yearning for justice—the urgency of taking a full and accurate account of irreplaceable loss, so we don’t keep making the same mistakes over and over again."
— Adrian Nicole LeBlanc, author of Random Family

"A haunting work of nonfiction.... Mr. Hobbs writes in a forthright but not florid way about a heartbreaking story.”
— The New York Times

"I can hardly think of a book that feels more necessary, relevant, and urgent."
— Grantland

"The Short Tragic Life of Robert Peace is a book that is as much about class as it is race. Peace traveled across America’s widening social divide, and Hobbs’ book is an honest, insightful and empathetic account of his sometimes painful, always strange journey."
— The Los Angeles Times

"Devastating. It is a testament to Hobbs’s talents that Peace’s murder still shocks and stings even though we are clued into his fate from the outset....a first-rate book. [Hobbs] has a tremendous ability to empathize with all of his characters without romanticizing any of them."
— Boston Globe

"It is hard to imagine a writer with no personal connection to Peace being able to generate as much emotional traction in this narrative as Hobbs does, to care as much about portraying fully the depth and intricacy of Peace’s life, his friends and the context of it all... it is an enormous writing feat.. fresh, compelling."
— The Washington Post

"[An] intimate biography... Hobbs uses [Peace's] journey as an opportunity to discuss race and class, but he doesn’t let such issues crowd out a sense of his friend’s individuality...By the end, the reader, like the author, desperately wishes that Peace could have had more time."
— The New Yorker

"Captivating... a smart meditation on the false promise of social mobility."
— Bloomsberg BusinessWeek

"The Short and Tragic Life of Robert Peace is a powerful book meant to haunt us with the question that plagued everyone who knew Peace. Hobbs has the courage not to counterfeit an answer leaving us with the haunting question: Why?"
— The New York Daily News

"The Short and Tragic Life [of Robert Peace] tackles some important topics: the swamp of poverty; the tantalizing hope of education; the question of whether anyone can truly invent a life or whether fate is, in fact, dictated by birth...[Its] account of worlds colliding will leave nagging questions for many readers which might be all to the good."
— The Seattle Times

"A haunting American tragedy for our times."
— Entertainment Weekly

"Can a man transcend the circumstances into which he’s born? Can he embody two wildly divergent souls? To what degree are all of us, more or less, slaves to our environments? Few lives put such questions into starker relief than that of one Robert DeShaun Peace... As Hobbs reveals in tremendously moving and painstaking detail, [Peace] may have never had a chance."
— San Francisco Chronicle

"Mr. Hobbs chronicles Peace’s brief 30 years on earth with descriptive detail and penetrating prose...
He paints a picture of a young man who was complex, like most of us, and depicted both his faults and admirable qualities equally. It is up to the reader to decide if Peace was an Ivy League grad caught up in a life of crime or just a victim of circumstances... Mr. Hobbs’ empathetic narrative gives readers an opportunity to view his life beyond a stereotype."
— Pittsburgh Post-Gazette

"With novelistic detail and deep insight, Hobbs... registers the disadvantages his friend faced while avoiding hackneyed fatalism and sociology... reveals a man whose singular experience and charisma made him simultaneously an outsider and a leader in both New Hampshire and Newark... This is a classic tragedy of a man who, with the best intentions, chooses an ineluctable path to disaster."
— Publishers Weekly, STARRED review

"Peace navigated the clashing cultures of urban poverty and Ivy League privilege, never quite finding a place where his particular brand of nerdiness and cool could coexist... [Hobbs] set out to offer a full picture of a very complicated individual. Writing with the intimacy of a close friend, Hobbs slowly reveals Peace as far more than a cliché of amazing potential squandered."
— Booklist, STARRED review

"One part biography and one part study of poverty in the United States, Hobbs's account of his friend's life and death highlights how our pasts shape us, and how our eternal search for a place of safety and belonging can prove to be dangerous. Peace's life was indeed short and tragic, but Hobbs aims to guarantee that it will not go unmarked."
— Shelf Awareness, STARRED review

"The resulting portrait of Peace is nuance, contradictory, elusive, and probing... At its core, the story compels readers to question how much one can really know about another person... VERDICT: An intelligent, provocative book, recommended for any biography lover."
— Library Journal

“If The Short and Tragic Life of Robert Peace were a novel, it would be a moral fable for our times; as nonfiction, it is one of the saddest and most devastating books I’ve ever read, a tour-de-force of compassion and insight, an exquisite elegy for a person, for a time of life, for a valid hope that nonetheless failed. It is also a profound reflection on a society that professes to value social mobility, but that often does not or cannot imbue privilege with justice. It is written with clarity, precision, and tenderness, without judgment, with immense kindness, and with a quiet poetry. Few books transform us, but this one has changed me forever.”
— Andrew Solomon, author of Far From the Tree and Noonday Demon

“Jeff Hobbs has written a mesmerizingly beautiful book, a mournful, yet joyous celebration of his friend Robert Peace, this full-throated, loving, complicated man whose journey feels simultaneously heroic and tragic. This book is an absolute triumph—of empathy and of storytelling. Hobbs has accomplished something extraordinary: he’s made me feel like Peace was a part of my life, as well. Trust me on this, Peace is someone you need to get to know. He’ll leave you smiling. His story will leave you shaken.”
— Alex Kotlowitz, author of There Are No Children Here: The Story of Two Boys Growing Up in the Other America

“A poignant and powerful can’t-put-it-down book about friendship and loss. The Short and Tragic Life of Robert Peace takes you on a nail-biting, heartbreaking journey that will leave you moved, shaken, and ultimately changed. In this spectacularly written first work of non-fiction, Jeff Hobbs creates a singular and searing portrait of an unforgettable life.”
— Jennifer Gonnerman, author of Life on the Outside: The Prison Odyssey of Elaine Bartlett

"Many institutions that provide bridges to realization of The American Dream conflate the aspirant’s yearning to participate fully with a desire to leave everything behind. The Short and Tragic Life of Robert Peace reveals the devastating consequences of this assumption. There are few road maps for students who carry our much-valued diversity, and few tools for those who remain ignorant of the diverse riches in their midst. Jeff Hobbs has made an important contribution to the literature for all of us. He shows what high quality journalism can aspire to in its own yearning for justice—the urgency of taking a full and accurate account of irreplaceable loss, so we don’t keep making the same mistakes over and over again."
— Adrian Nicole LeBlanc, author of Random Family