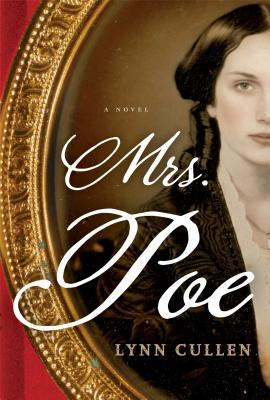 “Readers who enjoyed imagining the private lives of famous figures in Loving Frank and The Paris Wife will savor the behind-the-scenes peek into the intimacies of Edgar Allen Poe, his infirm young wife, and Frances Osgood, the writer who stole his heart. As compulsively readable -- and often as dark -- as Poe's works, Mrs. Poe is a well-researched and detailed work whose supporting cast of characters include Margaret Fuller, Horace Greely, and other literati of mid-19th century New York.”
— Cheryl McKeon, Book Passage, San Francisco, CA

Inspired by literature’s most haunting love triangle, award-winning author Lynn Cullen delivers a pitch-perfect rendering of Edgar Allan Poe, his mistress’s tantalizing confession, and his wife’s frightening obsession in this new masterpiece of historical fiction to which Sara Gruen says, “Mrs. Poe had my heart racing...Don't miss it!”

And make sure to check out the captivating new novel from Lynn Cullen—Twain’s End—where the acclaimed author tells a fictionalized imagining of the relationship between iconic author Mark Twain and his personal secretary, Isabel Lyon.

1845: New York City is a sprawling warren of gaslit streets and crowded avenues, bustling with new immigrants and old money, optimism and opportunity, poverty and crime. Edgar Allan Poe’s “The Raven” is all the rage—the success of which a struggling poet like Frances Osgood can only dream. As a mother trying to support two young children after her husband’s cruel betrayal, Frances jumps at the chance to meet the illustrious Mr. Poe at a small literary gathering, if only to help her fledgling career. Although not a great fan of Poe’s writing, she is nonetheless overwhelmed by his magnetic presence—and the surprising revelation that he admires her work.

What follows is a flirtation, then a seduction, then an illicit affair…and with each clandestine encounter, Frances finds herself falling slowly and inexorably under the spell of her mysterious, complicated lover. But when Edgar’s frail wife, Virginia, insists on befriending Frances as well, the relationship becomes as dark and twisted as one of Poe’s tales. And like those gothic heroines whose fates are forever sealed, Frances begins to fear that deceiving Mrs. Poe may be as impossible as cheating death itself…

Lynn Cullen grew up in Fort Wayne, Indiana and is the bestselling author of The Sisters of Summit Avenue, Twain’s End, and Mrs. Poe, which was named an NPR 2013 Great Read and an Indie Next List selection. She lives in Atlanta.

"When struggling poet and betrayed wife Frances Osgood meets Edgar Allen Poe, she is hoping only for a boost in her literary career—certainly not what came next. Swept into an illicit love affair with the complicated, magnetic, and married Poe, Osgood and Poe must together face the consequences, which are no less horrific or revenge-filled than his best loved horror stories—and quite possibly as deadly. Mrs. Poe had my heart racing...Don't miss it!"
— Sara Gruen, New York Times bestselling author of Water for Elephants and Ape House

"Layered with the atmosphere and intensity of Poe's prose, Cullen's Mrs. Poe infuses a tale of tragedy and loss with a spirit of passion and vitality. Fans of historical fiction and Poe will devour this novel."
— Erika Robuck, bestselling author of Call Me Zelda

“Readers can expect a page-turning tale exposing the transgressions, antics, and heroics behind a literary icon. Literary fiction fans and readers who loved Paula McLain’s The Paris Wife will relish another novel based on historical scandal and romance.”
— Library Journal (starred review)

“Part romance, part mystery, part biography, this fictional reenactment of the mistress of Edgar Allan Poe escorts you into the glittering world of New York in the 1840s, when poets were celebrities and the admission of emotions—like silk gowns and glossy beaver hats—were a luxury...A bewitching, vivid trip into the heyday of American literary society."
— Oprah.com

"A vivid portrait of New York's cultural life in the mid-1800s, when writers like Poe were practically rock stars. Don't miss it."
— People

“Is it true that Edgar Allen Poe cheated on his tubercular, insipid young wife with a lady poet he’d met at a literary salon? Cullen makes you hope so.”
— New York Times

"Mrs. Poe is such a compelling novel, bringing history to vivid life. Danger, sensuality, mystery and passion fill the pages of this bewitching story set in the crowded cobbled streets, alleyways,cheap boardinghouses and literary gatherings of mid-nineteenth century New York City. Everyone warns the lovely, near penniless poet Mrs. Osgood, a deserted wife with two young children, to stay away from the dark-eyed writer Edgar Allen Poe who has fallen in love with her. She writes tender verses; he creates blood-curdling tales but he is darker than his writing, carrying secrets of his frail much younger wife and his heinous past. Even when Mrs. Osgood understands that someone is trying to kill her because of him, she cannot put aside her passion until it is almost too late."
— Stephanie Cowell, author of Claude and Camille

"Lynn Cullen seems to have transported herself to Old New York—Mrs. Poe feels that authentic. Without a doubt, this is one of the best historical fiction novels I've read in a long time. Evocative, compassionate, intelligent, sexy and utterly addictive. The passion between Frances Osgood and Edgar Allen Poe burns up the pages while at the same time her relationship with Mrs. Poe makes your heart ache. Truly a book to savor!"
— M.J. Rose, International Bestselling Author

“At once beautiful and heartbreaking, Lynn Cullen has woven together a tapestry of fact and rumor to give us an intimate view into the forbidden love between two complicated, creative lives. Historical fictions fans, you’re in for a treat.”
— Susan Crandall, bestselling author of Whistling Past the Graveyard

"The fierce ambitions and dangerous rivalries of literary New York in the 1840s come vividly alive in Lynn Cullen's riveting novel Mrs.Poe. With masterful skill, Cullen tells the story of the real-life fatal attraction between the toast-of-the-town Gothic storyteller Edgar Allan Poe and vulnerable poet Frances Sargent Osgood.The fact that both are unhappily married did not sanction any sort of romance in this judgmental society, and Cullen skillfully charts the course of a fraught and forbidden love affair. As the lonely Mrs. Osgood is pulled further and further into Mr. Poe's dark world, the tensions in the Poes' bizarre marriage explode. Full of longing, this is a story both poignant and shocking—and not easily forgotten."
— Nancy Bilyeau, author of The Chalice

“Clearly composed and carefully researched the book’s vivid prose accentuates the passion, jealousy and hatred that evolve from a tangled three-way relationship that could easily have come straight from the pages of Poe’s stories. A must-read for those intrigued by Poe, poetry and the latter half of 19th-century America.”
— RT Book Reviews (four stars)

“Lynn Cullen weaves a dark, sensuous love triangle between three real people, and in the midst of many real historical details, she creates something truly and wonderfully surprising...Devotees of dark historical fiction will devour Mrs. Poe, but so too will fans of Gothic romance and forbidden love stories. This is an invigoratingly creepy historical novel propelled by brilliant pacing. If you like books that send a little shiver up your spine, don’t miss it.”
— Book Page

“Brilliant…a wonderful and fascinating novel… Poe absolutely comes to life in Cullen's novel…Mrs. Poe is truly one of the best historical fiction novels of 2013 and possibly ever.”
— Examiner.com

"With obvious love and admiration for Edgar Allan Poe and his works, the author writes her dialogue scenes with such authenticity you swear you are in the parlor of one of Poe’s closest friends [and have] somehow received an invitation to one of these private gatherings where Mr. Poe will arrive with his ailing younger wife, Virginia, to read his latest published poem."
— Kimberly Eve

"If you want to lose yourself in another time and place and become wrapped up in the drama of the life of literary New York and the characters who populated it then look no further. Mrs. Poe is a treasure and one you'll want to reread and research and remember."
— Stephanie Piro

"Lynn Cullen's Mrs. Poe delivers the passion for characters that I had found in Anna Karenina, the tragedy that I discovered in Splendor In the Grass, and the thrill ride that I experienced in Poe's eerily written stories."
— Dilettantish Reader

"I'm already a fan of Poe's work. To see another side to him, a softer side to his tormented soul, was refreshing and wonderful. There is no way I can give this novel any less than 5 stars."
— Literary R&R Book Blog

"I absolutely loved everything about this book, starting with the literary references right down to the forbidden romance. Cullen took all the pieces, fact and rumors, about Edgar Allen Poe and the characters around him and wrote a beautiful story that delves into feminism, technological progress, NYC literary society, and so much more."
— ShelfNotes.com

"Coupled with lyrical prose and a fascinatingly complicated love triangle, the book held my attention from start to finish,giving me an insight into the tumultuous life of not only the characters, but of writers and the struggles they faced."
— GreatHistoricals.com

“This is one of the best books that I have EVER read and I strongly encourage you to check it out, Poe fan or not, the writing is just that good.”
— Ionia Martin