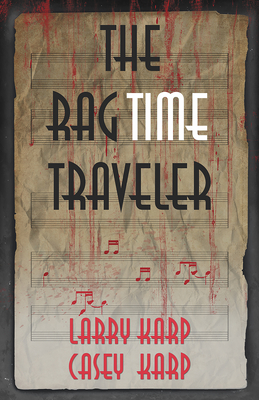 By Larry Karp, Casey Karp
$18.99
Unavailable at this time.

This is book number 4 in the Ragtime Mysteries series.

"The fourth Ragtime Mystery is filled with warmth and wonder and interesting music trivia, buoyed by the relationship between the two sleuths, which may well echo that between the late Larry Karp and his son, who finished this final installment after his death." —Kirkus Reviews

It takes one moment in 2016 for ragtime music expert Alan Chandler to go from sitting in his hotel room in Sedalia, Missouri, to standing beside the King of Ragtime—Scott Joplin—at his upright piano in 1899. Chandler suddenly finds himself more than one hundred years earlier inside the famous Maple Leaf Club with its gas chandeliers, massive walnut bar, gaming tables, and pals surrounding the noted pianist and composer.

"What in the hell is going on? Am I dreaming?"

Clearly something unexpected is going on for Chandler in the fourth and final Ragtime Mystery by father and son Larry Karp and Casey Karp. A longtime friend Mickey Potash phones Chandler, top ragtime performer and national expert on Joplin, to say that a duffel filled with Joplin's handwritten music has surfaced. Chandler and his grandson, Tom, race from Seattle to Sedalia to evaluate what may be the most important find in popular American music. Potash shows them initial pages which look authentic, but before they can get the duffel hidden in a padlocked closet, he is tortured and murdered. The duffel is stolen.

Disappointment encourages a resurgence of symptoms in Chandler's Stage 4 cancer. He's determined to validate the music before time runs out. Tom, and later his wife, Miriam, help him. Another murder complicates their investigation. The trail to the duffel is crowded: Jackson and Saramae, two young people with journalism in their blood, want to solve the crime, as do homicide detectives and antique shopkeepers. Not surprisingly, the roots of the lost music lie in past emotional conflict, now tangled in genealogical warfare.

Larry Karp grew up in Paterson, NJ and New York City. He practiced perinatal medicine (high-risk pregnancy care) and wrote general nonfiction books and articles for 25 years, then, in 1995, he left medical work to begin a second career, writing mystery novels. The backgrounds and settings of Larry's mysteries reflect many of his interests, including musical antiques, medical-ethical issues, and ragtime music.

Casey Karp has been a librarian and a software quality engineer. He has been writing full-time since 2013. The RagTime Traveler is his first novel.

An immigrant Californian, Casey and his wife, Maggie, have lived in the San Francisco Bay Area for more than two decades. They are owned by an ever-increasing herd of cats.