The New York Times Book of Politics: 167 Years of Covering the State of the Union (Hardcover) 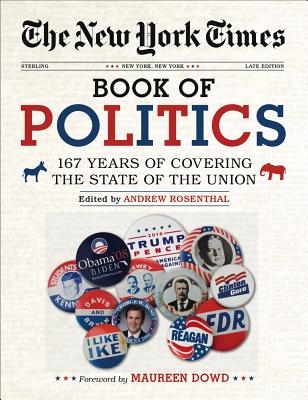 By Andrew Rosenthal, Maureen Dowd (Foreword by)
$27.95
On our shelves now at one or more of our stores

For 167 years, The New York Times has been in the forefront of political reporting--from memorable campaigns and elections to controversial legislation, scandals, and issues ranging from immigration, race, and gender to the economy and war.

In today's turbulent times, the newspaper's political coverage is more relevant than ever; not only for the news itself, but because of the paper's leadership in defending the freedom of the press.

Compiled by noted New York Times editor Andrew Rosenthal, this anthology explores the newspaper's broad scope of unparalleled political coverage and examines what has changed over the decades and what remains the same. Covering stories from 1856 to 2018, it features presidential milestones: the astounding 1860 triumph of Republicanism with Abraham Lincoln's election and Senator Barack Obama's 2008 presidential victory as racial barriers seemed, perhaps prematurely, to fall. Wars: the start of the atomic age, the fall of Saigon, the conflict in Iraq. Important legal issues like the ratification of the 19th amendment in 1920, the 2000 Florida presidential recount, and same-sex marriage. The course of the country's economy, such as the 2008 financial disaster and President Donald Trump's tax overhaul. Momentous protests, like the 1963 March for Civil Rights, Kent State, the takeover of Wounded Knee, Black Lives Matter, and the MeToo movement. Political scandals and investigations, from Watergate to the firing of F.B.I. director James B. Comey. And so much more.

With 60 photographs as well as reproductions of front-page stories, here are the noteworthy political articles from The New York Times archives that are sure to engross readers.

Included are stories on tumultuous campaigns and surprising elections, scandals that rocked the world, the waging of war--from "good" wars (World Wars I and II) to "bad" wars (Vietnam), groundbreaking legislation, important protests, and hot button issues like feminism, LGBTQ rights, and DACA. The 81 articles include:

Andrew Rosenthal is former editorial page editor of The New York Times and oversaw the editorial board, the Letters and Op-Ed departments, and the Editorial and Op-Ed sections of NYTimes.com. In March 2016, he became a columnist and podcast contributor for The Times. He was recently the Visiting Murrow Lecturer of the Practice of Press and Public Policy at Harvard.Maureen Dowd, winner of the 1999 Pulitzer Prize for distinguished commentary and author of three New York Times bestsellers, became an Op-Ed columnist in 1995. She also writes for the "Style" section and The Times Magazine.Ms. Dowd began her journalism career in 1974 as an editorial assistant at The Washington Star. In 1983, she joined The New York Times as a metropolitan correspondent and then moved to The Times' Washington bureau in 1986 to cover politics. Ms. Dowd has covered nine presidential campaigns, served as The Times' White House correspondent, and written "On Washington," a column for The Times Magazine. She is the author of several books, including Bushworld (2004, G. P. Putnam's Sons), Are Men Necessary? When Sexes Collide (2005, Penguin), and The Year of Voting Dangerously: The Derangement of American Politics (Grand Central). Ms. Dowd has also written for GQ, Vanity Fair, Rolling Stone, The New Republic, Sports Illustrated, and others. Her Op-Ed column appears every Sunday. She lives in Washington, DC.