Hothouse: The Art of Survival and the Survival of Art at America's Most Celebrated Publishing House, Farrar, Straus, and Giroux (Hardcover) 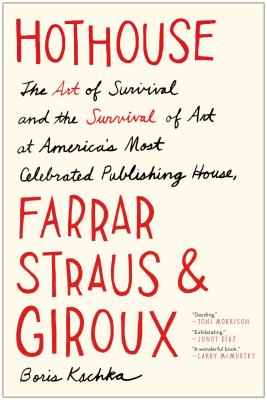 “Roger Straus, editor and publisher at FSG, was loved, loathed, feared, and admired, and the publishing house with which he came of age was (and still is) perhaps the mightiest producer of quality literature in America. Hothouse perfectly captures the often uneasy alliance of commerce and culture. Through anecdote and first hand reminiscences, Kachka weaves a compelling -- and sometimes hilarious -- history of 20th Century American publishing, involving the geniuses, egotists, and neurotics, namely most of the important voices in writing and publishing of a golden era of American literature.”
— Mark LaFramboise, Politics & Prose Books and Coffee Shop, Washington, DC

Farrar, Straus and Giroux is arguably the most influential publishing house of the modern era. Home to an unrivaled twenty-five Nobel Prize winners and generation-defining authors like T. S. Eliot, Flannery O’Connor, Susan Sontag, Tom Wolfe, Joan Didion, Philip Roth, and Jonathan Franzen, it’s a cultural institution whose importance approaches that of The New Yorker or The New York Times. But FSG is no ivory tower—the owner's wife called the office a “sexual sewer”—and its untold story is as tumultuous and engrossing as many of the great novels it has published.

Boris Kachka deftly reveals the era and the city that built FSG through the stories of two men: founder-owner Roger Straus, the pugnacious black sheep of his powerful German-Jewish family—with his bottomless supply of ascots, charm, and vulgarity of every stripe—and his utter opposite, the reticent, closeted editor Robert Giroux, who rose from working-class New Jersey to discover the novelists and poets who helped define American culture. Giroux became one of T. S. Eliot’s best friends, just missed out on The Catcher in the Rye, and played the placid caretaker to manic-depressive geniuses like Robert Lowell, John Berryman, Jean Stafford, and Jack Kerouac. Straus, the brilliant showman, made Susan Sontag a star, kept Edmund Wilson out of prison, and turned Isaac Bashevis Singer from a Yiddish scribbler into a Nobelist—even as he spread the gossip on which literary New York thrived.

A prolific lover and an epic fighter, Straus ventured fearlessly, and sometimes recklessly, into battle for his books, his authors, and his often-struggling company. When a talented editor left for more money and threatened to take all his writers, Roger roared, “Over my dead body”—and meant it. He turned a philosophical disagreement with Simon & Schuster head Dick Snyder into a mano a mano media war that caught writers such as Philip Roth and Joan Didion in the crossfire. He fought off would-be buyers like S. I. Newhouse (“that dwarf”) with one hand and rapacious literary agents like Andrew Wylie (“that shit”) with the other. Even his own son and presumed successor was no match for a man who had to win at any cost—and who was proven right at almost every turn.

At the center of the story, always, are the writers themselves. After giving us a fresh perspective on the postwar authors we thought we knew, Kachka pulls back the curtain to expose how elite publishing works today. He gets inside the editorial meetings where writers’ fates are decided; he captures the adrenaline rush of bidding wars for top talent; and he lifts the lid on the high-stakes pursuit of that rarest commodity, public attention—including a fly-on-the-wall account of the explosive confrontation between Oprah Winfrey and Jonathan Franzen, whose relationship, Franzen tells us, “was bogus from the start.”

Vast but detailed, full of both fresh gossip and keen insight into how the literary world works, Hothouse is the product of five years of research and nearly two hundred interviews by a veteran New York magazine writer. It tells an essential story for the first time, providing a delicious inside perspective on the rich pageant of postwar cultural life and illuminating the vital intellectual center of the American Century.

Boris Kachka in the author of Hothouse: The Art of Survival and the Survival of Art at America’s Most Celebrated Publishing House. He is the Books Editor at New York magazine, where he has also been a writer covering books, theater, film, and other cultural industries and personalities for many years. He has also contributed to the New York Times, GQ, Elle, T, and Condé Nast Traveler. He lives in Brooklyn, NY, with his wife and son.

“Swashbuckling . . . Exhaustively researched and sometimes gossipy . . . Hothouse is the hot book that book people are talking about, and understandably so.”
— Maureen Corrigan

“Gripping . . . [A] wonderful book . . . Hothouse is Pepys for our time, an unblinking account of publishing history as it was made by Roger’s firm, the last of America’s major independent publishing houses. Roger would have been thrilled to publish this fine book, including its frequent and deserved criticisms of himself.”

"Riveting . . . Stellar . . . A vivid narrative . . . Hothouse fits nicely on a shelf next to entertaining business books such as Walter Isaacson’s Steve Jobs or Michael Lewis’ Moneyball."

“Valuable . . . [A] vigorous and often diverting trot through the history of an important cultural institution . . . No one has previously anatomized a publishing house in such depth . . . Farrar, Straus & Giroux, moreover, is well worth anatomizing. It’s had a larger-than-life central character, an amusing cast of secondary characters, and a history replete with drama. Most important, it has maintained an amazingly consistent level of quality.”
— Robert Gottlieb

“Hothouse simmers with gossipy tales of publishing . . . and [is] blessed with real-life characters who could star in any sexy novel. . . . It’s not a book just for intellectuals.”

"Excellent . . . Hothouse is as engrossing as a biography of any major cultural icon."
— Elissa Schappell

“Hothouse is a thrilling look at the heyday of the publishing industry . . . [and] the man who, as Kachka points out, shaped the postwar intellectual tone in this country through the sheer dint of his brazenness and charm.”

“Irresistible . . . Juicy history . . . A delectable story about the intersection of art, commerce, passion and personalities. . . . Hothouse feels like a party where you’re surprised to discover that you know—and admire—most of the other guests.”

“What is it about literary types? Oh, the sex! Oh, the emotional drama! And, oh, what tremendous fun it all is to read about when we’re in the hands of a writer who knows how to spin a savory tale. So it is with Boris Kachka’s delectably gossipy Hothouse, a deeply researched, jam-packed, surprisingly hard-to-put-down history of the eminent publishing house Farrar, Straus & Giroux that escapes lit-nerd ghettoization by the sheer force of its storytelling. . . . Hothouse is a ripping read.”
— Laura Collins-Hughes

“Colorful history . . . Hothouse isn’t a management book; it’s a narrative of large personalities at play. Yet out of it comes a clear account of how to thrive in a tough commercial environment. . . . Kachka tells the story of the house’s ‘class-mass’ success in delicious detail.”
— Paul Elie

“A roaring chronicle . . . For anyone with a sweet tooth for the book world or a thought and a care for American culture after the Second World War, the book is a brightly lit, well-stocked candy store. . . . It’s also a superb business story, revealing how an enterprise became an institution. . . . [An] essential book.”
— Matt Weiland

“The truth about industry books is that they rarely interest those who live and breathe outside of the industry in question. In other words, people on the street rarely clamor for tours of the office buildings above them. The rare ability not only to lead the reader in, but induce him to want to stay and peer into the filing cabinets is what makes Boris Kachka’s first book Hothouse something of a masterpiece of business biography. . . . The real success of Hothouse lies in its telling, and Kachka manages a commanding momentum through decades at full wingspan.”

“A rough-and-tumble, heroic tale . . . Kachka takes us back to the black-and-white era when good old-fashioned hard­covers stood unassailably at the very heart of the culture. . . . I loved reading the spiky, spicy evocation of the company’s good old days.”

“Scintillating . . . Crammed with delicious anecdotes . . . [A] compulsively readable tale of the creation, triumphs and tribulations of Farrar, Straus and Giroux.”
— Julia M. Klein

“A juicy account of the postwar New York book world . . . Not your average beach read, Hothouse, out August 6, is one nonetheless—a Gossip Girl for those fascinated with the literary elite.”

“Farrar, Straus and Giroux is the Versailles of American publishing. . . . But every palace has its intrigue, as Kachka shows us in this lively, witty account. . . . The extramarital (and often intramural) affairs conducted by publisher Roger Straus in the 1960s and ’70s were legendary—his wife called the company a ‘sexual sewer’—but the entire office apparently would have made Don Draper blush. Kachka dishes up these cold cases piping hot, but his research reveals an equally fascinating business story: How do you balance fine art and filthy lucre?”

“Hothouse has both intelligence and wit in its revelations of publishing, publishers, and the capture of authors. The story of FSG is a dazzling wide-lens view of decades of literary America. To call Boris Kachka’s prose ‘brilliant’ is not a cliché; it has meaning.”
— Toni Morrison

“Boris Kachka would have you believe that Hothouse is the inside story of book publishing as told through the prism of that industry’s original odd couple. Do not believe him. Do not be fooled by the wonderful stories of famous authors, editors, and publishers. Here instead is a sneakily informative view of how art gets made in America, a fresh look at the intersection of commerce and culture.”
— Sloane Crosley

“As a literary biographer, I’m amazed this book hasn’t been written yet in some form, and we can only be grateful that the matter rested until such a stylish, insightful author as Kachka came along to write it. It reminds me of another of my favorite books, Brendan Gill’s Here at The New Yorker—full of sad/funny anecdotes about living, breathing human beings, namely (in both cases) nothing less than the major figures in twentieth century American literature. At the center of both books, too, are two fascinating, polar-opposite protagonists: New Yorker editors Harold Ross and William Shawn in Gill’s book, and the flamboyant, Ascot-wearing Roger Straus and his fastidious editor-in-chief, Robert Giroux, in Kachka’s. What all four of these deeply strange men had in common was a love of good writing and a genius for eliciting same from the fortunate authors in their charge. Hothouse is a must-read for anyone curious about the secret history of American publishing in the postwar era.”
— Blake Bailey

“Hothouse is a wonderful book—a sharp look at the backstory of a famous publishing house and the flamboyant man who got as much attention as the writers he usually got cheap. Bravo!”
— Larry McMurtry