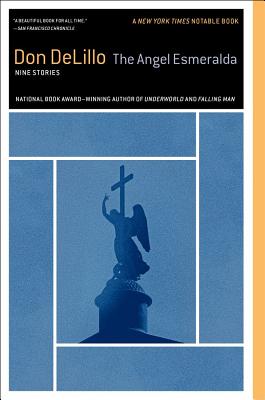 This collection reminded me why I love Don Delillo so much. These stories, which span his whole career, really show off the author at his best. I have been feeling for quite a while that the reason I like most of Delillo's novels is more for their parts rather than their whole (Libra being the exception - I love that book). The baseball game and the party at Truman Capote's in Underworld, the opening scene in The Body Artist, almost any single section of Point Omega, are all essentially exquisite stand alone stories. Here you get his power, his brevity, his focused finesse and, most of all, the unnamed haunting menace of our daily lives that Delillo teases out of the most ordinary of situations (running in the park, going to a movie, viewing an art exhibit).

“This is the book DeLillo fans have been waiting for -- his first collection of short stories written between 1979 and 2011. In these stories, DeLillo takes global themes and ideas, the conflicts we often don't want to acknowledge, and makes them human. The subjects are true and resonant: a jogger who witnesses a kidnapping, an elderly nun working in poverty-stricken New York, an astronaut looking down on a war-ravaged Earth. Each story is textured in DeLillo's precise, startling voice, one that can shout and whisper at the same time.”
— Michael Karpus, Books & Books at Bal Harbour Shops, Bal Harbour, FL

A finalist for the PEN/Faulkner Award for Fiction and the Story Prize, the first ever collection of “dazzlingly told” (The New York Times) short stories—now available as a trade paperback.

Set in Greece, the Caribbean, Manhattan, a white-collar prison and outer space, this “small masterpiece of short fiction” (USA Today) is a mesmerizing introduction to Don DeLillo’s iconic voice. In “Creation,” a couple at the end of a cruise somewhere in the West Indies can’t get off the island—flights canceled, unconfirmed reservations, a dysfunctional economy. In “Human Moments in World War III,” two men orbiting the earth, charged with gathering intelligence and reporting to Colorado Command, hear the voices of American radio, from a half century earlier. In the title story, Sisters Edgar and Grace, nuns working the violent streets of the South Bronx, confirm the neighborhood’s miracle, the apparition of a dead child, Esmeralda.

Nuns, astronauts, athletes, terrorists and travelers, the characters in The Angel Esmeralda propel themselves into the world and define it. These nine stories describe an extraordinary journey of one great writer whose prescience about world events and ear for American language changed the literary landscape.

Don DeLillo is the author of seventeen novels including White Noise, Libra, Underworld, Falling Man, and Zero K. He has won the National Book Award, the PEN/Faulkner Award for Fiction, the PEN/Saul Bellow Award, the Jerusalem Prize for his complete body of work, and the William Dean Howells Medal from the American Academy of Arts and Letters. His story collection The Angel Esmeralda was a finalist for the Story Prize and the PEN/Faulkner Award for Fiction. In 2013, DeLillo was awarded the Library of Congress Prize for American Fiction, and in 2015, the National Book Foundation awarded DeLillo its Medal for Distinguished Contribution to American Letters.

“A beautiful book for all time”—San Francisco Chronicle

“A vital addition to DeLillo’s corpus…expertly realized…The gods have equipped DeLillo with the antennae of a visionary. There is right field, and there is left field. He comes from third field—aslant, athwart. And I love The Angel Esmeralda: Nine Stories.”—Martin Amis, The New Yorker

“A terrific overview of [DeLillo’s] many strengths, from pitch-perfect character descriptions to surprising humor to soaring lyricism...The literary fireworks of the title piece alone are a stunning example of how the ordinary can become extraordinary in a gifted artist’s hands…Behold and be dazzled.”—Josh Emmons, People

“Many of [DeLillo’s] deceptively simple sentences will leave you awestruck…This slim volume is a marvel—a masterpiece of short fiction.”—Carmela Ciuraru, USA Today

“I was dazzled…Reading this collection confirms DeLillo as one of our very best short story writers…The richness of his work, the pleasures on offer—intellectual, visceral, poetic, comic—are unrivalled.”—Sam Lipsyte, author of The Ask

“[DeLillo’s] prose is masterly and austere…Even the most fragmentary of [the stories] provides the pleasure of reading the inimitably elegant sentences that DeLillo has been fashioning for four decades.”—Troy Jollimore, The Washington Post

“The typical DeLillo tale reads like a diagnosis of a zeitgeist malady we never knew we had, and in these stories the malady is one of spellbound fixation. DeLillo has achieved a very particular kind of greatness…and his gifts…are, for a contemporary American writer, unsurpassed.”—Charles Baxter, The New York Review of Books