Better Off Without 'em: A Northern Manifesto for Southern Secession (Paperback) 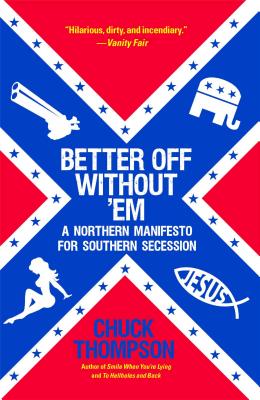 "As if Kevin Phillips's American Theocracy were being narrated by Rolling Stone's Matt Taibbi," Chuck Thompson's "viciously funny and thoroughly tasteless" examination of Southern secession was one of the most controversial books of the year (Washington Monthly). Chuck Thompson--dubbed "savagely funny" by the New York Times and "wickedly entertaining" by the San Francisco Chronicle--spent two years traveling the American South to determine whether, as he'd long suspected but not yet proven, the whole country might be better off letting Dixieland make good on its two-hundred-years-old threat to secede. The result is a long overdue and serious inquiry into national divides that is deliberately provocative and uproariously funny while making a compelling case for "a kind of no-fault divorce for nation-states: no hard feelings, just two adults who can't quite make the relationship work, shaking hands and walking away" (The Oxford American).