Canadianity: Tales from the True North Strong and Freezing (Paperback) 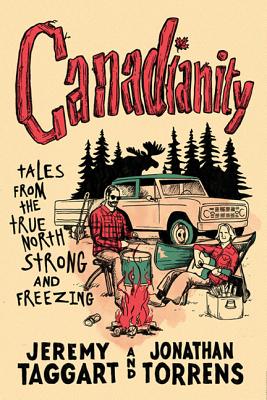 By Jeremy Taggart, Jonathan Torrens
$18.50
Unavailable at this time.

Sprung from their hugely successful Taggart & Torrens podcast, Taggart (that guy from that band) and Torrens (that guy from that show) share a collection of showbiz tales from the road and relatable everyday anecdotes, all wrapped up in a nostalgic fondness for this great country.

Canadianity takes readers on a cross-country journey, shining the spotlight on notable local heroes (or bahds), the best places to crush food and the greasiest watering holes, coast to coast to coast. Filled with lists of Canada’s top bands, television shows and athletes, as well as random observations about everything this country has to offer, Canadianity is often provocative and always hilarious.

Drawing on their combined experiences as a legendary drummer (Our Lady Peace) and a veteran talk-show host (Jonovision) respectively, Taggart and Torrens have infused their first book with equal parts beer and pop culture and added a heaping helping of irreverence.

JEREMY TAGGART was born in Toronto and raised in Mansfield, Ontario. He is a former drummer of Our Lady Peace, and has worked with a number of high-profile Canadian musicians, including Tom Cochrane, Geddy Lee and the Arkells. He lives with his wife and three children just outside Toronto.

JONATHAN TORRENS was born in Charlottetown and raised in Sherwood, Prince Edward Island, before moving to Halifax to attend high school. He hosted CBC’s teen-oriented consumer affairs show Street Cents and the talk show Jonovision before appearing in a number of television productions, including Trailer Park Boys, Degrassi: The Next Generation, Wipeout Canada and Mr. D. He lives in rural Nova Scotia with his wife and daughters.

“Are you kidding me? I’ve now wasted a few hours I’ll never get back on this book. Oh well . . . that’s the kind of day it’s been.” — Lloyd Robertson

“Jeremy and Jonathan have established themselves as the Woodward and Bernstein of their generation. Or at the very least, the Hal and Joanne.” — Jay Onrait, author of the bestsellers Anchor Boy and Number Two

“I was happy to hear that Jeremy and Jonathan had written a book. When they approached me about writing something for the back of the book, I said no.” — Paul Langlois, The Tragically Hip

“If you are looking for a good read, this is not it. If nothing else, this book is great tinder for the fire.”
— Hayley Wickenheiser, Olympic gold medallist

“I’ve known these guys a long time and to be honest, when I heard they were putting out a book, I just assumed it was one of those really simple colouring books. After barely getting through a couple of pages, I decided to stop. Regardless, I’m proud of them.” — George Stroumboulopoulos