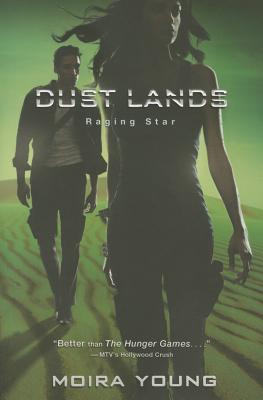 This is book number 3 in the Dust Lands series.

Saba’s passion kept her allies alive. Now it may destroy them all in the gut-wrenching third book in the highly praised Dust Lands trilogy, which MTV’s Hollywood Crush blog called “better than The Hunger Games.”

Saba is ready to seize her destiny and defeat DeMalo...until she meets him and he confounds all her expectations with his seductive vision of a healed earth, a New Eden. DeMalo wants Saba to join him, in life and work, to create and build a healthy, stable, sustainable world…for the chosen few. The young and healthy. Under his control.

Jack’s choice is clear: to fight DeMalo and try to stop New Eden. Presumed dead, he’s gone undercover, feeding Saba crucial information in secret meetings. Saba commits herself to the fight—and hides her connection with DeMalo. Joined by her brother, Lugh, and her sister, Emmi, Saba leads a small guerilla band against the settlers and the Tonton militia. But the odds are overwhelming. Saba knows how to fight—she’s not called the Angel of Death for nothing. But what if the fight cannot be won? Then DeMalo offers her a seductive chance she may not be able to refuse. How much will she sacrifice to save the people she loves?

Betrayal lurks in unexpected places in the breathtaking conclusion to the Dust Lands Trilogy.

Moira Young is the author of the Dust Lands series. The first book, Blood Red Road, won the Costa Children’s Book Award, was a Cybils Award Winner for fantasy and science fiction, and was a Best Fiction for Young Adults selection. The Dust Lands continues with Rebel Heart, which received a starred review in Publishers Weekly, and Raging Star. A native Canadian, Moira lives with her husband in the UK. Learn more at MoiraYoung.com.

"This is the concluding and most absorbing book in the Old West–flavored Dust Lands trilogy, and Young has done a stellar job populating a spare yet beautiful landscape with flawed, heroic characters...settle in for a heartbreaking and satisfying conclusion."
— Booklist