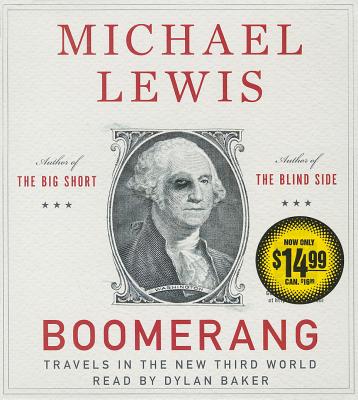 By Michael Lewis, Dylan Baker (Read by)
$14.99
Unavailable at this time.

From the #1 New York Times bestselling author of The Big Short, Liar’s Poker and The Blind Side!

The tsunami of cheap credit that rolled across the planet between 2002 and 2008 was more than a simple financial phenomenon: it was temptation, offering entire societies the chance to reveal aspects of their characters they could not normally afford to indulge.

The Greeks wanted to turn their country into a piñata stuffed with cash and allow as many citizens as possible to take a whack at it. The Germans wanted to be even more German; the Irish wanted to stop being Irish.

The trademark of Michael Lewis’s bestsellers is to tell an important and complex story through characters so outsized and outrageously weird that you’d think they have to be invented. (You’d be wrong.) In Boomerang, we meet a brilliant monk who has figured out how to game Greek capitalism to save his failing monastery; a cod fisherman who, with three days’ training, becomes a currency trader for an Icelandic bank; and an Irish real estate developer so outraged by the collapse of his business that he drives across the country to attack the Irish Parliament with his earth-moving equipment.

Lewis’s investigation of bubbles beyond our shores is so brilliantly, sadly hilarious that it leads the American listener to a comfortable complacency: Oh, those foolish foreigners. But when Lewis turns a merciless eye on California and Washington DC, we see that the narrative is a trap baited with humor, and we understand the reckoning that awaits the greatest and greediest of debtor nations.

“No one writes with more narrative panache about money and finance than Lewis.”
—Michiko Kakutani, New York Times

Michael Lewis, the bestselling author of The Undoing Project, Liar’s Poker, Moneyball, The Blind Side, and The Big Short, among other works, lives in Berkeley, California, with his wife and three children.

Dylan Baker's films include Happiness, Along Came A Spider, and 13 Days. He starred on the TV series Feds and Murder One. Mr. Baker's theater credits include La Bete (Tony & Drama Desk nominations), Eastern Standard (Theatre World Award), and Not About Heroes (Obie Award).