We Are Not Ourselves: A Novel (CD-Audio) 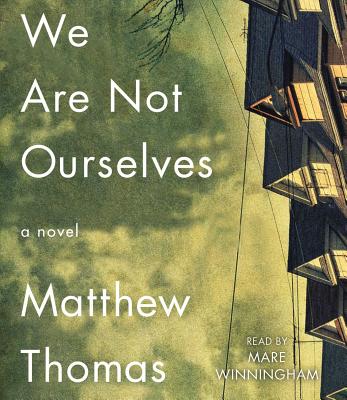 By Matthew Thomas, Mare Winningham (Read by)
Unavailable at this time.
Unavailable

“This is simply the most perfect, brilliantly written novel I have read in a long time! Suspenseful, full of heartwarming moments of lightness and love intertwined with dark moments of foreboding, it is the story of a marriage, a family, and the struggle to attain the American Dream. Most of all, it is the story of Eileen Leary, the daughter of Irish immigrants, and her unwavering strength, love, loyalty, and hopes for herself, her husband, Ed, and their son, Connell. The novel spans from 1951 to 2011 and is set primarily in New York, but the unexpected tragedy that befalls the Learys could happen in any town in any country. Immensely moving and thought-provoking!”
— Maria Roden, Orinda Books, Orinda, CA

As an Irish immigrant in Queens in 1941, Eileen has dreamed of more in her life—but when she and her family seem to be moving closer to that dream, devastation hits and they must learn how to not only hold on to their reality, but to each other.

Born in 1941, Eileen Tumulty is raised by her Irish immigrant parents in Woodside, Queens, in an apartment where the mood swings between heartbreak and hilarity, depending on how much alcohol has been consumed. From an early age, Eileen wished that she lived somewhere else. She sets her sights on upper class Bronxville, New York, and an American Dream is born.

Driven by this longing, Eileen places her stock and love in Ed Leary, a handsome young scientist, and with him begins a family. Over the years Eileen encourages her husband to want more: a better job, better friends, a better house. It slowly becomes clear that his growing reluctance is part of a deeper, more incomprehensive psychological shift. An inescapable darkness enters their lives, and Eileen and Ed and their son Connell try desperately to hold together a semblance of the reality they have known, and to preserve, against long odds, an idea they have cherished of the future.

Described by The New York Times Book Review as “A long, gorgeous epic, full of love and caring…one of the best novels you’ll read this year,” We Are Not Ourselves is a testament to our greatest desires and our greatest frailties. Through the lives of these characters, Thomas charts the story of the American Century. The result is, “stunning…The joys of this book are the joys of any classic work of literature—for that is what this is destined to become—superbly rendered small moments that capture both an individual life and the universality of that person’s experience” (The Washington Post).

Matthew Thomas was born in the Bronx and grew up in Queens. A graduate of the University of Chicago, he has an MA from the Writing Seminars at Johns Hopkins University and an MFA from the University of California, Irvine. His New York Times bestselling novel We Are Not Ourselves has been shortlisted for the Flaherty-Dunnan First Novel Prize from the Center for Fiction and longlisted for the Guardian First Book Award. He lives with his wife and twin children in New Jersey.

Mare Winningham has appeared in more than fifty film and television projects, garnering an Academy Award nomination for Georgia and Emmy Awards for the telefilms George Wallace and Amber Waves. She is also an accomplished singer-songwriter.