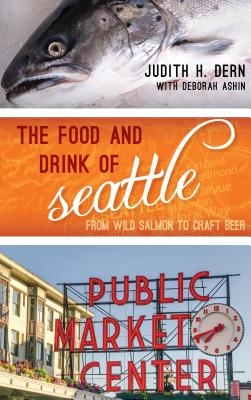 By Judith Dern, Deborah Ashin (With)
$38.00
On our shelves now at one or more of our stores

Offers a comprehensive exploration of Seattle's cuisine from geographical, historical, cultural, and culinary perspectives. From glaciers to geoducks, from the Salish Sea with swift currents sweeping wild salmon home from the Pacific Ocean to their original spawning grounds, to settlers, immigrants, and restaurateurs, Seattle's culinary history is vibrant and delicious, defining the Puget Sound region as well as a major U.S. city. Exploring the Pacific Northwest 's history from a culinary perspective provides an ideal opportunity to investigate the area's Native American cooking culture, along with Seattle's early boom years when its first settlers arrived. Waves of immigrants from the mid-1800s into the early 1900s brought ethnic culinary traditions from Europe and beyond and added more flavor to the mix. As Seattle grew from a wild frontier settlement into a major twentieth century hub for transportation and commerce following World War II, its home cooks prepared many All-American dishes, but continued to honor and prepare the region's indigenous foods. Taken altogether and described in the pages of this book, it's quickly evident few cities and regions have culinary traditions as distinctive as Seattle's.

Judith Dern is a published author with numerous cookbooks and national and regional articles to her credit. Judith has pursued word wizardry and all things edible for her career, the outcome of cooking and collecting cookbooks since she was a teenager. Her most recent cookbook is The Food and Cooking of Scandinavia: Sweden, Norway & Denmark (2011). In her day job, she serves as senior research insights manager at Meredith Corporation, having joined its leading digital site, Allrecipes.com, the world's largest digital food brand, in 2007. A past board of directors member for the International Association of Culinary Professionals (IACP), she serves on the board of The Culinary Trust (TCT), IACP's charitable foundation focused on culinary issues, and is a member of Les Dames D'Escoffier.