From Small Screen to Vinyl: A Guide to Television Stars Who Made Records, 1950-2000 (Hardcover) 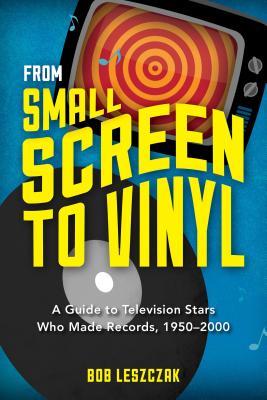 By Bob Leszczak
Unavailable at this time.

From its infancy, television networks and studios explore others avenues to increase their revenues. Conveniently enough, several film studios and production companies-MGM, MTM, Columbia/Screen Gems, Talent Associates, Warner Brothers-had their own record label divisions. The obvious benefit was cross promotion: a television series could be plugged on the record and the record could be promoted on the TV show. Though few and far between, several television performers went on to become major recording stars. Ricky Nelson started as a child actor on The Adventures of Ozzie and Harriet before dominating rock and pop charts. Johnny Crawford of The Rifleman, Walter Brennan of The Real McCoys, and even Bruce Willis of Moonlighting all scored Top Ten hit singles. But these were just the standouts from the hundreds of TV actors who recorded songs, and the stories behind their records are simply fascinating. In From Small Screen to Vinyl: A Guide to TV Stars Who Made Records 1950-2000, author Bob Leszczak offers a look at hundreds of stars who performed double duty: as a television performer as well as a recording artist. He looks not only at the show and the performer but the behind-the-scenes dramas that unfolded as each attempted to tackle the two different mediums. Through his interviews with many of these multitaskers, the author has uncovered new, and mostly never before known facts about those who sought to conquer the world of vinyl. As Leszczak stresses, most eagerly embraced the opportunity to record, while others saw it as a necessary evil-the result of contractual obligations or industry pressures. Entries are listed alphabetically from Nick Adams (of The Rebel) to Efrem Zimbalist, Jr. (of 77 Sunset Strip). Also included are over 80 photos of these rare releases taken from the author's private collection. For a new look at your old favorites, From Small Screen to Vinyl, will let you see that just because one is a TV star does not mean that he or she does not have the ability to expand beyond their acting prowess. Baby boomers, fans of classic hits radio, and devotees of classic TV programs will find From Small Screen to Vinyl a treasure trove of TV and record trivia-and no TV or music library can be considered complete without it.

Bob Leszczak, author of Single Season Sitcoms, 1948-1979: A Complete Guide, The Odd Couple on Stage and Screen, The Encyclopedia of Pop Music Aliases, 1950-2000, and the three volumes of Who Did It First? Great Cover Songs and Their Original Artists, was also the writer and producer of Solid Gold Scrapbook, a syndicated weekly five-hour music trivia radio show for the United Stations Radio Network. For more than three decades, he's been an oldies radio on-air personality at a variety of nationally recognized stations in New York, Boston, Washington, D.C., Denver, Tampa, Orlando, and San Bernardino. Now back in his home state of New Jersey, he is the afternoon drive announcer on Classic Hits WJRZ-FM. Bob sang and toured with the Duprees of "You Belong to Me" fame in the 1980s and has worked as an extra in motion pictures.