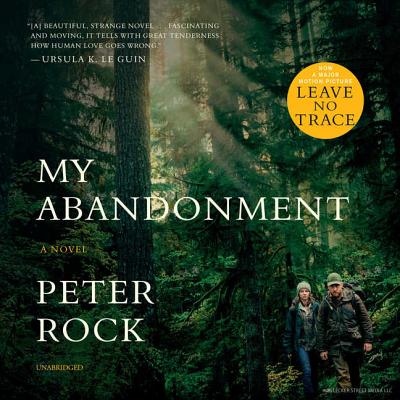 “Loosely based on a true story, My Abandonment reveals the secret world of 13-year-old Caroline and her father as they make their life in a nature reserve in Oregon. Full of details of a life created in the wild as well as the captivating view of Caroline, the novel pulls you along to its heart-wrenching end. The book raises many questions about our society and parenting, and would be an excellent book group choice.”
— Leslie, Inkwood Books, Tampa, FL

“No one knows that 13-year-old Caroline has been living with her father on the fringes of Portland, Oregon, in dense forest, until one seemingly insignificant slipup propels them back into the urban world, a world in which they are far less suited to survive. This is a book you won't put down until you finish it; a book whose characters you'll never forget.”
— Betsy Burton, The King's English, Salt Lake City, UT

Leave No Trace, a film adaptation of My Abandonment, directed by Debra Granik (Winter's Bone) premiered at the Sundance Film Festival to critical acclaim.

A thirteen-year-old girl and her father live in Forest Park, an enormous nature preserve in Portland, Oregon. They inhabit an elaborate cave shelter, wash in a nearby creek, store perishables at the water's edge, use a makeshift septic system, tend a garden, even keep a library of sorts. Once a week they go to the city to buy groceries and otherwise merge with the civilized world. But one small mistake allows a backcountry jogger to discover them, which derails their entire existence, ultimately provoking a deeper flight.

Inspired by a true story and told through the startlingly sincere voice of its young narrator, Caroline, My Abandonment is a riveting journey into life at the margins and a mesmerizing tale of survival and hope.