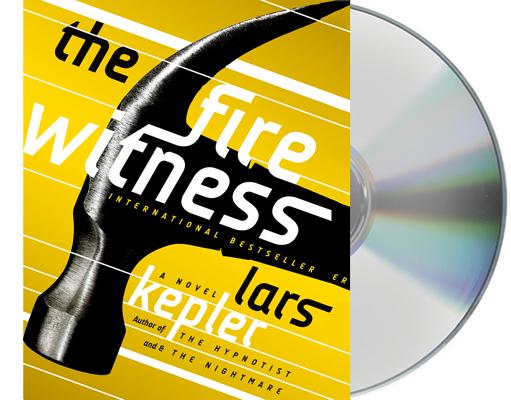 Lars Kepler, the authors of The Hypnotist and The Nightmare, deliver their most thrilling novel yet

Flora Hansen calls herself a medium and makes a living by pretending to commune with the dead. But after a gruesome murder at a rural home for wayward girls, Hansen begins to suffer visions that are all too real. She calls the police claiming to have seen a ghost, but only one detective puts aside his skepticism long enough to listen: Joona Linna.
Linna has spent more time at the scene of the crime than any other detective would. The case seems obvious on the face of it: One of the girls at the home escaped in the middle of the night, leaving behind a bloody bed with a hammer under the pillow. But why does Hansen insist that the murder instrument was a stone, not a hammer? And what's the story behind the dark-red grain of sand, almost like a splinter from a ruby, stuck beneath the dead girl's fingernail? As Linna refuses to accept the easy answers, his search leads him into darker, more violent territory and, finally, to a shocking confrontation with a figure from his past.
Just as The Hypnotist and The Nightmare did, The Fire Witness has spent months at number one on the Swedish bestseller lists. As the newspaper Dagens Nyheter put it, you start the book "on the subway home, keep reading at the dinner table, and then don't stop until well into the wee hours." With publication to come in more than fifteen countries, it's sure to join the ranks of its predecessors as an international sensation.

Lars Kepler is the pseudonym for a literary couple who live and write in Sweden. Their novels, including The Nightmare and The Hypnotist, have been number-one bestsellers in more than a dozen countries, including France, Spain, Germany, Italy, Holland, and Denmark. The film version of The Hypnotist is directed by Lasse Hallstrom (Chocolat, The Cider House Rules).

“The Fire Witness will have you from the first mashed skull to the final excruciating confrontation between innocents and evil. It’s the kind of jet-propelled read that leads to making squirrelly excused to get back to your earbuds…Mark Bramhall gives a faultless, taut, and sympathetic performance, and that coupled with complex but controlled and fast-paced plotting and a silky-smooth translation makes this a completely absorbing production. Bramhall’s timbre is attractively roughened, and his range of character voices is truly impressive.” – AudioFile Magazine, Earphones Award Winner

“This dark mystery is rendered even more haunting by Mark Bramhall’s performance. His deep and crackling voice not only heightens the book’s significant suspense but also grabs listeners’ attention and refuses to let go.” – Publishers Weekly

“Lars Kepler is a master of the craft. I’ve listened to a few crime mystery audiobooks, and I feel comfortable saying, ‘This is one of the best I’ve heard.’” – New World Review