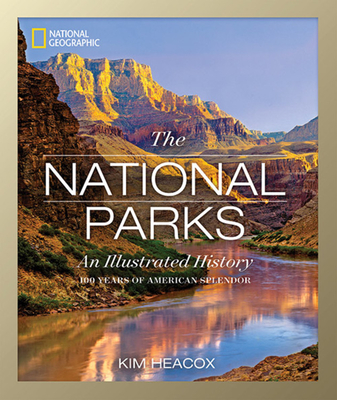 By Kim Heacox
$50.00
On our shelves now at one or more of our stores

An inspired tribute to the astonishing beauty and priceless cultural treasures of America's National Parks, this volume is a lavish celebration of the 100th anniversary of the National Park Service. Showcasing the very best of National Geographic's photographs, combined with an expertly told history: from the multi-hued layers of the Grand Canyon to the verdigris flame of the Statue of Liberty, this book presents a breathtaking panorama of the National Parks.     With the stories behind the first female park ranger, a decidedly amateur scuba expedition that unearthed a submerged Civil War treasure trove, and so much more, Heacox takes readers on a VIP tour of America's rich natural and cultural heritage. The full sweep of wonders-from pristine coral reefs to the Gettysburg battlefield to glaciers and all the glorious diversity in between-offers a breathtaking tour of the very best of America's national treasures.

KIM HEACOX has written a dozen books, five for National Geographic on biography, history and wildlands conservation. His most recent books (four published in a 20-month period) are a biography, John Muir and The Ice That Started A Fire (April 2014, starred reviews in Kirkus, Booklist and Publisher's Weekly, nominated for the National Book Award); a Denali memoir, Rhythm of the Wild (May 2015); a literary novel, Jimmy Bluefeather (September 2015, starred reviews in Kirkus and Library Journal), and the official exhibit-format centennial book for the U.S. National Park Service, The National Parks, published by National Geographic in October 2015.   Kim's 2005 Glacier Bay memoir, The Only Kayak, now in its ninth printing, was a 2006 PEN USA Literary Award finalist in creative non-fiction. Kim has twice won the Lowell Thomas Award for excellence in travel writing. His 1992 book of essays and photography, In Denali, won the 1993 Benjamin Franklin Award.   A former ranger with the U.S. National Park Service (1977-85, most of that time in Alaska), Kim also served on the 1989 National Park Service EXXON VALDEZ Oil Spill Task Force. He lives with his wife, Melanie, in the little town of Gustavus, the gateway to Alaska's Glacier Bay National Park. Learn more about him at www.kimheacox.com.

"Through iconic National Geographic images and an illuminating collection of stories and personalities, the book offers a portrait of diverse National Park Service properties while presenting a colorful history of the service and its century of notable accomplishments. Heacox weaves a mesmerizing tale filled with fascinating stories, such as the first female park ranger, an amateur scuba expedition that unearthed a Civil War treasure trove, and much more. Coupling these stories with breathtaking photographs of glorious glaciers, pristine coral reefs, towering forests and all of the beautiful scenery in between, Heacox provides readers with a vivid panorama of the national parks, monuments, battlefields, historic sites, shores and recreation areas preserved over a century of dedicated conservation." --Examiner.com