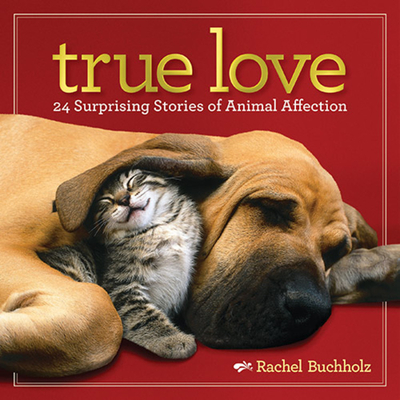 By Rachel Buchholz
$9.95
Unavailable at this time.

This perfect National Geographic Valentine's Day gift is filled with uplifting true love stories from the animal kingdom and heartwarming accounts of animal emotions, friendships, romance, sibling and parent-child love. Author Rachel Buchholz, a longtime editor with National Geographic Kids magazine, has been collecting amazing animal stories for more than a decade and has gathered her favorites to show the many kinds of love that animals share, from inseparable best friends to romantically devoted duos. Touching photographs, inspiring animal facts, and meaningful quotes about love round out the book--making it a special way to show someone the true meaning of love. Stories include:

SIBLING LOVE - Brother and sister bears: In Cooper Landing, Alaska, a fishing guide spotted brother and sister grizzly bears fishing in the river. The brother had an injured front paw from a gunshot wound (same hunter who had killed his mother) and couldn't catch salmon. Brother bear would charge, the fish would scatter, and he came up empty-pawed every time. The guide was worried about the cub until she saw his sister, who normally would've gone off on her own, stay by his side catching fish and dropping them at his feet. She stayed with her brother for 4 weeks to catch fish for him.

PARENTS & CHILDREN - Lioness supermom: When a little lion cub fell halfway down a cliff, a group of lionesses didn't know what to do. At the cliff's bottom lurked hungry crocodiles, and one false move could send them and the baby tumbling down to become prey. Four lionesses try and give up: the cliff is too treacherous for them. But the lion's mother climbs down the sheer cliff face, scoops him up in her mouth, and crawls up the cliff side to safety.

BEST FRIENDS - Bear the bobcat and Robi the caracal: In Sherwood, Oregon, Bear the bobcat was blind, grumpy, and friendless. He didn't get along with any of the other captive cats at his sanctuary. His keepers were worried about him until Robi the caracal moved into the enclosure next door. The bobcat perked up and started rubbing against the fence of his new neighbor. When the two were introduced to each other, Bear affectionately head-butted Robi and they became best friends forever. Now Robi serves as Bear's "guide cat."
ROMANCE - Jake and Jemima, ducks in love: In North Devon, England, Jake the Muscovy duck waddled for weeks to return to his sweetheart, Jemima. Their owner had given Jake to a friend eight miles away. But Jake overcame three snowstorms and animal threats to return to Jemima. Muscovy ducks can't fly very high--only a few feet--and he had to find his way around four-foot-high hedges and fences to get back to his girl. When he found Jemima again, his owner saw the two ducks cuddle up "like an old married couple."

RACHEL BUCHHOLZ is the executive editor of National Geographic Kids and National Geographic Little Kids magazines in Washington, DC. In her more than 15 years editing for the tween market she has learned that dogs love to skateboard, that ghosts live in the White House, that a stack of currency one mile high contains more than 14 million bills, and that if you're in doubt, run a story about Harry Potter. Buchholz has helped the magazine's 1.1 million readers set five Guinness World Records, and in the process of collecting large amounts of stuff has talked Cameron Diaz out of her sneakers (Longest Chain of Shoes) and Ben Stiller out of his jeans (Largest Collection of Clothes to Recycle). She is the author of the Children's Choice-nominated book How to Survive Anything: Shark Attack, Lightning, Embarrassing Parents, Pop Quizzes, and Other Perilous Situations and a former editor at Boys' Life magazine in Dallas. Although she will tell you that she's originally from Texas, documents reveal that Buchholz actually grew up in Oklahoma.