Happy Trails to You: Stories (Paperback) 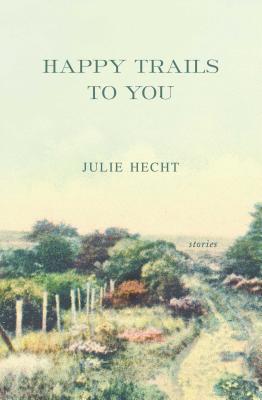 Now in paperback, the newest collection of stories from the acclaimed author of Do the Windows Open?, Was This Man a Genius?, and The Unprofessionals—a brilliant, complex work that delivers more of the exquisitely funny and beautifully observant prose that draws ardent praise from critics and readers.

• An exceptional author: Julie Hecht’s fiction has appeared in The New Yorker and Harper’s, and her books have received spectacular reviews from The New York Times, The Washington Post, The Boston Globe, Time, and many other publications. All of the author’s books have been named New York Times Notable Books.

• A singular character: At her first appearance, Hecht’s anxious, beguiling, and anonymous photographer-narrator was an instant literary icon. Her strategies—macrobiotics, herbal remedies, a bit of Xanax—for surviving civilization’s decline have established her as one of the most enthusiastically read voices of the last decade.

• Our postmodern world, re-examined: With an unwavering gaze on the absurdities and ironies of the larger world, Happy Trails to You recounts the narrator’s attempts to find a place of unspoiled nature on the once peaceful island of Nantucket, where power mowers, nail guns, and speeding trucks have blocked out the sounds of birdsong and crickets. A visit to a friend or restaurant touches upon every subject from the color of paint to the world situation and infinity.

Julie Hecht is the author of Do the Windows Open?, Was This Man a Genius?: Talks with Andy Kaufman, and The Unprofessionals. Her stories have been published in The New Yorker and Harper's. She has won an O. Henry Prize and received a Guggenheim Fellowship. She lives on the east end of Long Island in winter and in Massachusetts in summer and fall. She has been writing stories since she was eight years old.

"But as times have changed, so has [the book's] character -- wonderfully, bracingly so. Hecht's latest story collection, Happy Trails to You, is piloted by the same half-babbling, half-deadpan voice, now with larger, more political concerns...These aren't merely the worries of an eccentric middle-aged East Coast vegetarian; they're the all-too-common concerns of the mainstream liberal consciousness. In the new century, Hecht's narrator is suddenly less alone in her alarm and alienation, finding more kindred spirits than ever before...But Hecht plays with this stereotype on many levels, and the collection's strongest moments describe a frustration with civilization that can't be blamed solely on psychosis." -- Katherine Hill, Bookforum