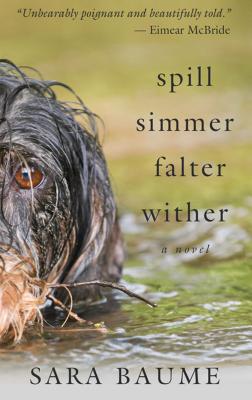 “Baume's debut novel is a heartbreaking story of loneliness and friendship, depression and pure joy, as revealed through the relationship between a man and the dog he rescues. Baume's transcendent use of language and utterly original voice had me stopping to read whole sentences -- even entire paragraphs -- aloud. Spill Simmer Falter Wither is an amazing achievement by a writer who makes her work seem effortless.”
— Mary Wolf (M), Collected Works Bookstore & Coffeehouse, Santa Fe, NM

A debut novel already praised as "unbearably poignant and beautifully told" (Eimear McBride) this captivating story follows over the course of four seasons a misfit man who adopts a misfit dog. It is springtime, and two outcasts a man ignored, even shunned by his village, and the one-eyed dog he takes into his quiet, tightly shuttered life find each other, by accident or fate, and forge an unlikely connection. As their friendship grows, their small, seaside town suddenly takes note of them, falsely perceiving menace where there is only mishap; the unlikely duo must take to the road.Gorgeously written in poetic and mesmerizing prose, S"pill Simmer Falter Wither"has already garnered wild support in its native Ireland, where the "Irish Times "pointed to Baume's astonishing power with language and praised it as a novel bursting with brio, braggadocio and bite. It is also a moving depiction of how over thefour seasons echoed in the title a relationship between fellow damaged creatures can bring them both comfort. One of those rare stories that utterly, completely imagines its way into a life most of us would never see, it transforms us not only in our understanding of the world, but also of ourselves.

Sara Baume studied fine art before earning a Master s in Creative Writing. Her short fiction has appeared inthe" The Moth," "The Stinging Fly," the"Irish Independent"," " and others. She won the 2014 Davy Byrnes Short Story Award and the 2015 Hennessy New Irish Writing Award. She lives in Cork with her two dogs."