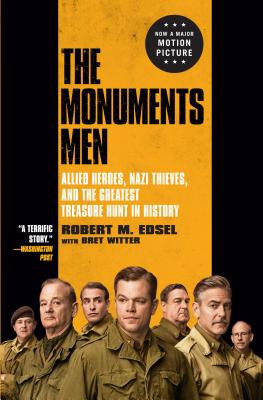 By Robert M. Edsel, Bret Witter
Unavailable at this time.
Out of print

At the same time Adolf Hitler was attempting to take over the western world, his armies were methodically seeking and hoarding the finest art treasures in Europe. The Fuehrer had begun cataloguing the art he planned to collect as well as the art he would destroy: "degenerate" works he despised.
In a race against time, behind enemy lines, often unarmed, a special force of American and British museum directors, curators, art historians, and others, called the Momuments Men, risked their lives scouring Europe to prevent the destruction of thousands of years of culture.
Focusing on the eleven-month period between D-Day and V-E Day, this fascinating account follows six Monuments Men and their impossible mission to save the world's great art from the Nazis.

Normal0falsefalsefalseEN-USX-NONEX-NONEMicrosoftInternetExplorer4 Robert M. Edsel is the Founder and President of the Monuments Men Foundation for the Preservation of Art, a not-for-profit entity that received the National Humanities Medal, the highest honor given in the United States for work in the humanities field. He also serves as a Trustee at the National WWII Museum in New Orleans. He lives in Dallas.