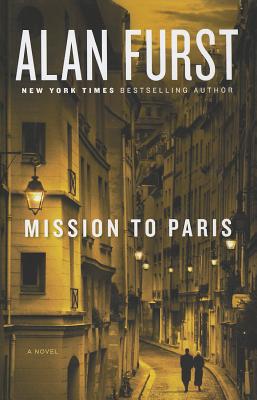 By Alan Furst
Unavailable at this time.
Out of print

It is the late summer of 1938, Europe is about to explode, the Hollywood film star Fredric Stahl is on his way to Paris to make a movie for Paramount France. The Nazis know he's coming--a secret bureau within the Reich Foreign Ministry has for years been waging political warfare against France, using bribery, intimidation, and corrupt newspapers to weaken French morale and degrade France's will to defend herself.
For their purposes, Fredric Stahl is a perfect agent of influence, and they attack him. What they don't know is that Stahl, horrified by the Nazi war on Jews and intellectuals, has become part of an informal spy service being run out of the American embassy in Paris.
From Alan Furst, the bestselling author, often praised as the best spy novelist ever, comes a novel that's truly hard to put down. "Mission to Paris" includes beautifully drawn scenes of romance and intimacy, and the novel is alive with extraordinary characters: the German Baroness von Reschke, a famous hostess deeply involved in Nazi clandestine operations; the assassins Herbert and Lothar; the Russian film actress and spy Olga Orlova; the Hungarian diplomat and spy, Count Janos Polanyi; along with the French cast of Stahl's movie, German film producers, and the magnetic women in Stahl's life, the socialite Kiki de Saint-Ange and the emigre Renate Steiner.
But always at the center of the novel is the city of Paris, the heart and soul of Europe--its alleys and bistros, hotels grand and anonymous, and the Parisians, living every night as though it was their last. As always, Alan Furst brings to life both a dark time in history and the passion of the human hearts that fought to survive it.
Praise for Alan Furst
"Unfolds like a vivid dream . . . One couldn't ask for a more engrossing novel.""--The Wall Street Journal, "about" Spies of the Balkans"
" "
"Though set in a specific place and time, Furst's books are like Chopin's nocturnes: timeless, transcendent, universal. One does not so much read them as fall under their spell."--"Los Angeles Times, " about" The Spies of Warsaw"
"Alan Furst's novels swing a beam into the shadows at the edges of the great events leading to World War II. Readers come knowing he'll deliver effortless narrative."--"USA Today, " about "The Foreign Correspondent"
"Positively bristles with plot, characters and atmosphere . . . "Dark Voyage" has the ingredients of several genres--the mystery, the historical novel, the espionage thriller, the romance--but it rises above all of them."--"The Washington Post, " about" Dark Voyage"
"No other espionage writer touches Furst's] stylish forays into Budapest and Berlin, Moscow and Paris. No other writer today captures so well the terror and absurdity of the spy, the shabby tension and ennui of emigre communities at the time. His characters are hopeless, lethal, charming. His voice is, above all, knowing."--"Boston Sunday Globe, " about "Blood of Victory"

Alan Furst is widely recognized as the master of the historical spy novel. Now translated into eighteen languages, he is the author of "Night Soldiers, Dark Star, The Polish Officer, The World at Night, Red Gold, Kingdom of Shadows, Blood of Victory, Dark Voyage, The Foreign Correspondent, The Spies of Warsaw, "and "Spies of the Balkans." Born in New York, he lived for many years in Paris, and now lives on Long Island.