Bury My Heart at Wounded Knee: The Illustrated Edition: An Indian History of the American West (Hardcover) 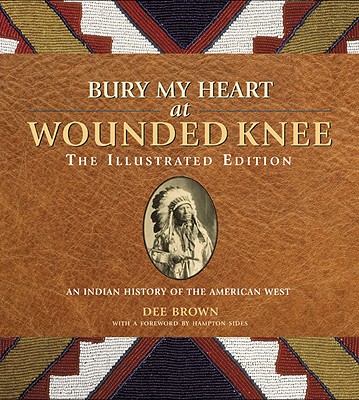 By Dee Brown, Hampton Sides (Foreword by)
Unavailable at this time.
Unavailable

For the first time: a full-color illustrated edition of Dee Brown's classic history of the American West Eloquent, heartbreaking, and meticulously documented, "Bury My Heart at Wounded Knee" follows the systematic destruction of the American Indian during the second half of the 19th century. Upon its publication in 1970, the book was universally lauded and became a cultural phenomenon that proved instrumental in transforming public perceptions of manifest destiny and the winning of the West.Using council records, autobiographies, and firsthand descriptions, Brown's work highlighted the voices of those American Indians who actually experienced the battles, massacres, and broken treaties. Here is their view of the events that ultimately left them demoralized and defeated, including: the Battle of Sand Creek; Red Cloud's War; the Battle of the Little Bighorn; and, of course, the Wounded Knee Massacre. Crazy Horse, Red Cloud, Sitting Bull, and Spotted Tail the great chiefs and warriors of the Dakota, Ute, Cheyenne, and other tribes come to life through their own words and formal portraits.Now, hundreds of illustrations including maps, photographs, sketches, and paintings enhance Brown's masterpiece, making it even more vivid and personal. In addition to the incredible images, this edition also features relevant excerpts from such highly acclaimed Native-American themed books as "Where White Men Fear to Tread" by Russell Means, "Mystic Chords of Memory "by Michael Kammen, and "Lakota Woman" by Mary Crow Dog, as well as all-new essays by contemporary historians and Native American leaders like Elliott West and Joseph Marshall III.

A librarian for many years at the University of Illinois at Urbana-Champaign, Dee Brown was the author of more than 25 books on the American West and the Civil War. His" Bury My Heart at Wounded Knee," considered a classic in its field, was a "New York Times "bestseller for over a year and has been translated into many languages. Dee Brown died in 2002.