The Boy Who Knew Too Much: An Astounding True Story of a Young Boy's Past-Life Memories (Paperback) 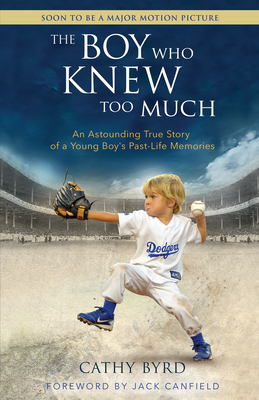 Now in tradepaper: The compelling and heartwarming story of a young baseball prodigy who began sharing vivid memories of being famed American baseball player Lou Gehrig.

At the tender age of two, baseball prodigy Christian Haupt began sharing vivid memories of being a baseball player in the 1920s and '30s. From riding cross-country on trains, to his fierce rivalry with Babe Ruth, Christian described historical facts about the life of American hero and baseball legend Lou Gehrig that he could not have possibly known at the time.
Distraught by her son's uncanny revelations, Christian's mother, Cathy, embarked on a sacred journey of discovery that would shake her beliefs to the core and forever change her views on life and death.
In this compelling and heartwarming memoir, Cathy Byrd shares her remarkable experiences, the lessons she learned as she searched to find answers to this great mystery, and a story of healing in the lives of these intertwined souls.
The Boy Who Knew Too Much will inspire even the greatest skeptics to consider the possibility that love never dies.

Cathy Byrd is a residential real estate broker and mother of two young children who never had aspirations of becoming a writer until her two-year-old son began sharing memories of being a baseball player in the 1920s and '30s. A Southern California native, Cathy received her B.A. from UCLA and her M.B.A. from Pepperdine University. Prior to becoming a Realtor, Cathy had an exciting 10-year career in sports marketing, working for the World Cup and Olympic Torch Relay Organizing Committees and serving as vice president of the Magic Johnson Foundation. The most likely place to find Cathy in her free time is at a youth baseball field.

"Byrd’s memoir almost reads like a suspenseful novel, and readers are sure to be gripped by the possible explanations she provides for (her son’s) seemingly inexplicable memories. She also thoughtfully reflects on her own spirituality, and the ways in which her son’s revelations challenged her Christian faith . . . On the whole, this is an affecting portrayal of parenthood, and an affectionate love letter from a mother to her unusual child. An eclectic mix of mystery, memoir, and the supernatural."
— Kirkus Reviews

"This is a wonderful book, intelligent, humorous, and overflowing with spiritual insights—one of the most transformative and thought-provoking books I’ve ever encountered."
— Jack Canfield, co-creator of the New York Times #1 best-selling series, Chicken Soup for the Soul®

"A riveting tale of a talented young boy with a love of the game and the natural talent to go along with it. More importantly, it is a story of how a mother’s love can defy all logic and move mountains. Cathy Byrd is one heck of a baseball mom and a true advocate for all children."
— Tommy Lasorda, National Baseball Hall of Fame Dodgers manager

"A mother and son’s extraordinary story demonstrates how our connections with loved ones do not end with the death of the physical body. Love’s eternal bond brings our souls together again and again, leading to a richer sense of purpose in our lives."
— Eben Alexander, M.D., neurosurgeon, New York Times #1 best-selling author of Proof of Heaven

"This engaging, soulful, and highly entertaining memoir has the power to transform the way you think about life and death."
— John Gray, Ph.D., New York Times #1 best-selling relationship author of all time, author of Beyond Mars and Venus

"In her inspirational new book, Cathy Byrd documents the compelling past-life memories of her young son. She also describes her own past-life regression recollections, linking both mother and son in a previous lifetime. The Boy Who Knew Too Much is an exciting journey into the mystery and power of past-life memories. I highly recommend this book."
— Brian L. Weiss, M.D., New York Times best-selling author of Many Lives, Many Masters

"Growing up in the 1970s, I’ve always viewed the Lou Gehrig story as somewhat mystical, from the famous farewell speech to my all-time favorite movie, The Pride of the Yankees. After reading the amazing journey of Cathy Byrd and Christian Haupt, the spirit of Gehrig resonates for the next generation of baseball fans to appreciate."
— Mark Langill, team historian, Los Angeles Dodgers