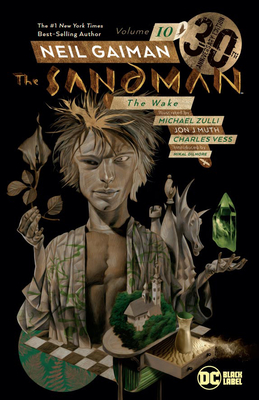 In the final Sandman tale, Morpheus makes the ultimate decision between change and death. As one journey for the Endless ends, another begins for the Lord of Dreams and his family, bringing with it a time of reflection and a sad celebration.

One of the most popular and critically acclaimed graphic novels of all time, Neil Gaiman's award-winning masterpiece The Sandman set the standard for mature, lyrical fantasy in the modern comics era. Illustrated by an exemplary selection of the medium's most gifted artists, the series is a rich blend of modern and ancient mythology in which contemporary fiction, historical drama and legend are seamlessly interwoven.

In The Wake, ancient gods, old friends and enemies alike gather to pay tribute to the fallen King of Dreams, bringing to a close the long story of Morpheus of the Endless. In the aftermath, echoes of Morpheus reverberate, touching a man who refuses to die, a Chinese sage lost in a desert of dreams and an aging William Shakespeare, who must fulfill one last obligation to the Sandman in his own twilight years.

Neil Gaiman is the New York Times bestselling author of the Newbery Medal-winning The Graveyard Book and Coraline, the basis for the hit movie. His other books include Anansi Boys, Neverwhere, American Gods, and Stardust, (winner of the American Library Association's Alex Award as one of 2000's top novels for young adults) as well as the short story collections M Is for Magic and Smoke and Mirrors. He is also the author of The Wolves in the Walls and The Day I Traded My Dad for Two Goldfish, both written for children. Among his many awards are the Eisner, the Hugo, the Nebula, the World Fantasy, and the Bram Stoker. Originally from England, he now lives in the United States.

Charles Vess has been drawing ever since he could hold a crayon. His award-winning work has graced covers and pages from numerous comic book publishers including THE BOOKS OF MAGIC, SWAMP THING, THE SANDMAN from DC Comics and Spider-Man from Marvel Comics. He currently concentrates on book illustration where he continues to win praise and accolades for his unique style. Vess shared the prestigious World Fantasy Award for Best Short Story with Neil Gaiman in 1991 for their collaboration on THE SANDMAN #19, A MIDSUMMER NIGHT'S DREAM. Vess recently completed a short story included in the FABLES: 1,001 NIGHTS OF SNOWFALL graphic novel from Vertigo and Blueberry Girl, a picture book written by Neil Gaiman. STARDUST, the graphic novel created by Neil Gaiman and Vess was released as a major motion picture adaptation in 2007.

“Neil Gaiman is, simply put, a treasure house of story, and we are lucky to have him in any medium.” —Stephen King

“A sober, somber conclusion—literally, a dying fall—to a sequence that undeniably constitutes a major achievement. There is nothing quite like it anywhere else.” —The Independent

"The greatest epic in the history of comic books." —The Los Angeles Times Magazine

"One of the few comics that segued from the comics crowd, entering the intellectual and art worlds, winning over a large non-comics-reading audience." —The Hollywood Reporter

"The Sandman is a modern myth, as well as a precis on why the stories we tell matter so much." —Playboy