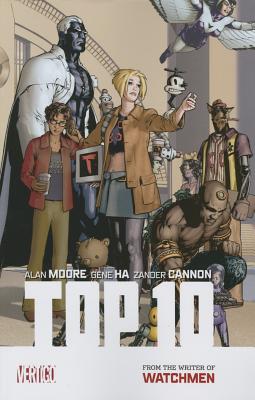 The massive, multilayered city of Neopolis, built shortly after World War II, was designed as a home for the expanding population of science-heroes, heroines and villains that had ballooned into existance in the previous decade. Bringing these powered beings together solved some problems but created others - turning Neopolis into a pressure cooker that normal policing methods could never contain.

Join rookie cop Robyn Singer, alter ego "Toybox," as she hits the streets for the first time along with a colorful crew of fellow officers, each having the required training to deal with science-villains and super-crimes. You'll never look at powers, or police work, the same way again!

Written by Alan Moore (WATCHMEN, V FOR VENDETTA) and drawn by the team of Gene Ha and Zander Cannon, TOP 10 combines superheroics and cop drama like no series before or after it. Collects issues #1-12.

Alan Moore is perhaps the most acclaimed writer in the graphic story medium, having garnered countless awards for works such as WATCHMEN, V FOR VENDETTA, SWAMP THING and Miracleman. He is also the mastermind behind the America's Best Comics line, through which he has created (along with many talented illustrators) THE LEAGUE OF EXTRAORDINARY GENTLEMEN, PROMETHEA, TOM STRONG, TOMORROW STORIES and TOP TEN. As one of the medium's most important innovators since the early 1980s, Moore has influenced an entire generation of comics creators, and his work continues to inspire an ever-growing audience.