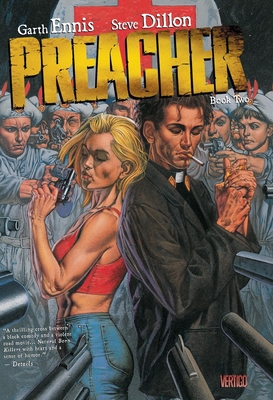 In the continuing saga of the bizarre adventures of faithless Texas preacher Jesse Custer, along with his girlfriend Tulip, and their friend Cassidy, the Irish vampire, head west to a party of Babylonian proportions. Then, Jesse heads for France to rescue Cassidy from the clutches of religious fanatics. His search leads him into a no-holds-barred battle against the forces of the mysterious organization known as The Grail. Readers will also learn the story of how Cassidy became a vampire in the first place!

Garth Ennis has been writing comics for twenty years, initially for British titles like 2000 AD and Crisis, then for various American publishers. As well as Preacher, his credits include Hellblazer, Hitman, War Story, Adventures in the Rifle Brigade, Kev, Battler Britton, The Boys, Battlefields, Dan Dare, 303, The Chronicles of Wormwood, Crossed, Streets of Glory, Dicks, The Punisher, Fury and The Pro. Originally hailing from Belfast, Northern Ireland, he now resides in New York City with his wife, Ruth.

"Just about the best thing to come along since comics started finding their way into books."—The Washington Post

"Features more blood and blasphemy than any mainstream comic in memory. Cool."—Entertainment Weekly