Wesley the Owl: The Remarkable Love Story of an Owl and His Girl (Compact Disc) 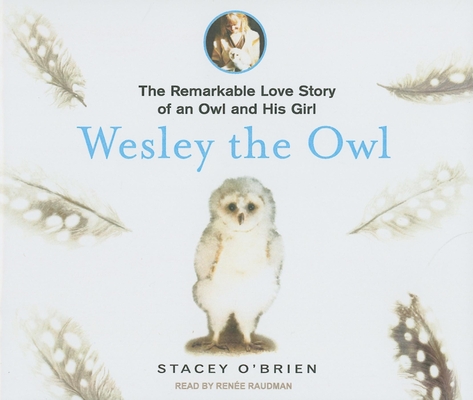 By Stacey O'Brien, Renee Raudman (Narrated by)
Unavailable at this time.
Out of print

On Valentine's Day 1985, biologist Stacey O'Brien met a four-day-old baby barn owl a fateful encounter that would turn into an astonishing nineteen-year saga. With nerve damage in one wing, the owlet's ability to fly was forever compromised, and he had no hope of surviving on his own in the wild. O'Brien, a young assistant in the owl laboratory at Caltech, was immediately smitten, promising to care for the helpless owlet and give him a permanent home. Wesley the Owl is the funny, poignant story of their dramatic two decades together. With both a tender heart and a scientist's eye, O'Brien studied Wesley's strange habits intensively and provided a mice-only diet that required her to buy the rodents in bulk (28,000 over the owl's lifetime). As Wesley grew, O'Brien snapped photos of him at every stage like any proud parent, recording his life from a helpless ball of fuzz to a playful, clumsy adolescent to a gorgeous, gold-and-white, macho adult owl with a heart-shaped face and an outsize personality that belied his eighteen-inch stature. Stacey and Wesley's bond deepened as she discovered Wesley's individual personality, subtle emotions, and playful nature that could also turn fiercely loyal and protective though she could have done without Wesley's driving away her would-be human suitors O'Brien also brings us inside the prestigious research community, where resident owls sometimes flew freely from office to office and eccentric, brilliant scientists were extraordinarily committed to studying and helping animals; all of them were changed by the animal they loved. As O'Brien gets close to Wesley, she makes important discoveries about owl behavior, intelligence, and communication, coining the term "The Way of the Owl" to describe his inclinations: he did not tolerate lies, held her to her promises, and provided unconditional love, though he was not beyond an occasional sulk. When O'Brien develops her own life-threatening illness, the biologist who saved the life of a helpless baby bird is herself rescued from death by the insistent love and courage of this wild animal. Wesley the Owl is a thoroughly engaging, heartwarming, often funny story of a complex, emotional, nonhuman being capable of reason, play, and, most important, love and loyalty. It is sure to be cherished by animal lovers everywhere.

Stacey O'Brien, a biologist, works as a wildlife rescuer and rehabilitation expert with a variety of local animals, including the endangered brown pelican, owls, seabirds, possums, and songbirds.

Renee Raudman is a multi-award-winning audiobook narrator and actor. A multiple Audie Award nominee, she has earned a number of "AudioFile" Earphones Awards, and her narration of "Homer's Odyssey" by Gwen Cooper was selected by "Library Journal" as one of the best audiobooks of 2009.