War Is a Force That Gives Us Meaning (Paperback) 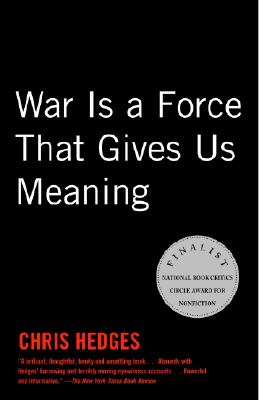 By Chris Hedges
Email or call for price.
Unavailable at this time.

As a veteran war correspondent, Chris Hedges has survived ambushes in Central America, imprisonment in Sudan, and a beating by Saudi military police. He has seen children murdered for sport in Gaza and petty thugs elevated into war heroes in the Balkans. Hedges, who is also a former divinity student, has seen war at its worst and knows too well that to those who pass through it, war can be exhilarating and even addictive: "It gives us purpose, meaning, a reason for living."
Drawing on his own experience and on the literature of combat from Homer to Michael Herr, Hedges shows how war seduces not just those on the front lines but entire societies, corrupting politics, destroying culture, and perverting the most basic human desires. Mixing hard-nosed realism with profound moral and philosophical insight, War Is a Force That Gives Us Meaning is a work of terrible power and redemptive clarity whose truths have never been more necessary.

Chris Hedges has been a foreign correspondent for fifteen years. Currently on staff at "The New York Times," he has previously worked for "The Dallas Morning News," "The Christian Science Monitor," and National Public Radio. He holds a master of divinity from Harvard University. He lives in New York City.

“The best kind of war journalism: It is bitterly poetic and ruthlessly philosophical. It sends out a powerful message to people contemplating the escalation of the ‘war against terrorism.’” –Los Angeles Times

“Chris Hedges has written a powerful book, one which bears sad witness to what veterans have long understood . . . [A] somber and timely warning to those – in any society – who would evoke the emotions of war for the pursuit of political gain.” —General Wesley K. Clark, former Supreme Allied Commander, Europe, and author of Waging Modern War

“[A] powerful chronicle of modern war . . . .A persuasive call for humility and realism in the pursuit of national goals by force of arms . . . .a potent and eloquent warning.” --The New York Times

“No one is in a better position than Hedges to pronounce on the revolting things war does to everyone caught up in it. . . . A confession of rare and frightening honesty.” –Slate.com