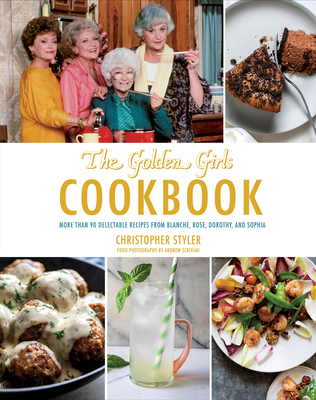 A cookbook for fans of the Golden Girls, the recipes and photos included bring back the fun, humor, and delight of the hit show and the beloved characters. Filled with innovative recipes by renowned chef Christopher Styler, and beautiful photos by New York Times food photographer Andrew Scrivani, plus fun quotes, info, and photographs from the show!


There will be Italian meals like Clams Fra Diavlo in Sophia’s chapter, and Southern food like honey-bourbon glazed carrots in Blanche’s, and of course some amazing cheesecakes. And what Golden Girls cookbook would be complete without Rose's favorite Scandinavian dishes, like St. Olaf Friendship cake, a simple, buttery treat.


From drinks and appetizers, to salads and mains, there is something to delight every fan in this witty and approachable cookbook.

Christopher Styler is an experienced chef, teacher, culinary producer, and author with over 30 years of experience in the food world. Trained as a restaurant chef, he has worked in kitchens from Italy to Martha’s Vineyard, from Manhattan to Bogotá.
Chris is the author or coauthor of several books including Primi Piatti, Mom’s Secret Recipe File, Smokin’, The Desperate Housewives Cookbook, Working the Plate, Sylvia's Soul Food (with Sylvia Woods) Blue Collar Food (with Bill Hodge), Vegetable Love (with Barbara Kafka; winner of a 2005 IACP award), Daisy Cooks! (with Daisy Martinez; IACP finalist), and Rosa’s New Mexican Kitchen (with Roberto Santibañez).
In January 1999, he was named editor at large for Food Arts magazine. Two of his articles for Food Arts have won awards from the Association of Food Journalists.
During the last 10 years, Chris has served as culinary producer for eight PBS and Food Network television series, including: Daisy Cooks! with Daisy Martinez (premiered 2005 through 2006), Lidia's Italian Table and Lidia’s Italian American Kitchen (airing from Fall 1998 through Winter 2004); Julia and Jacques: Cooking at Home (Fall 1999); Savor the Southwest (Spring 1999) and, America’s Test Kitchen (Spring 2001); and Joanne Weir’s Cooking Class (Winter 2009).
Chris starter Freelance Food, LLC, in 1999, which specializes in corporate product and recipe development. He lives in the New York metropolitan area and his website is www.chrisstyler.com.