In Deep: The FBI, the CIA, and the Truth about America's "Deep State" (Hardcover) 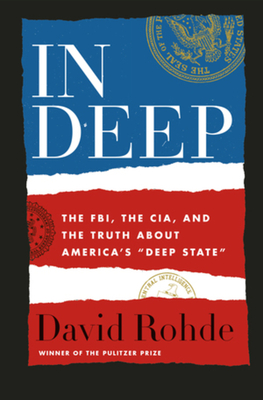 By David Rohde
$30.00
Unavailable at this time.

A two-time Pulitzer Prize–winning journalist’s investigation of the "deep state."

Three-quarters of Americans believe that a group of unelected government and military officials secretly manipulate or direct national policy in the United States. President Trump blames the "deep state" for his impeachment. But what is the American "deep state" and does it really exist?

To conservatives, the “deep state” is an ever-growing government bureaucracy, an "administrative state" that relentlessly encroaches on the individual rights of Americans. Liberals fear the "military-industrial complex"—a cabal of generals and defense contractors who they believe routinely push the country into endless wars. Every modern American president—from Carter to Trump—has engaged in power struggles with Congress, the CIA, and the FBI. Every CIA and FBI director has suspected White House aides of members of Congress of leaking secrets for political gain. Frustrated Americans increasingly distrust the politicians, unelected officials, and journalists who they believe unilaterally set the country’s political agenda. American democracy faces its biggest crisis of legitimacy in a half century.

This sweeping exploration examines the CIA and FBI scandals of the past fifty years—from the Church Committee’s exposure of Cold War abuses, to Abscam, to false intelligence about Iraq’s weapons of mass destruction, to NSA mass surveillance revealed by Edward Snowden. It then investigates the claims and counterclaims of the Trump era, and the relentless spread of conspiracy theories online and on-air. While Trump says he is the victim of the "deep state," Democrats accuse the president and his allies of running a de facto "deep state" of their own that operates outside official government channels and smears rivals, both real and perceived.

The feverish debate over the "deep state" raises core questions about the future of American democracy. Is it possible for career government officials to be politically neutral? Was Congress’s impeachment of Donald Trump conducted properly? How vast should the power of a president be? Based on dozens of interviews with career CIA operatives and FBI agents, In Deep answers whether the FBI, CIA, or politicians are protecting or abusing the public’s trust.

David Rohde, two-time recipient of the Pulitzer Prize, is an executive editor of The New Yorker website and a former Reuters, New York Times, and Christian Science Monitor reporter. He lives in New York.

Fascinating.... The idea of the deep state, Rohde writes, is inextricably linked to a particular view of presidential power.... After reading In Deep, one can’t help wondering how much Trump’s suspicion of and disdain for expertise and experience (and the so-called ‘policy elite’) has affected his response to the coronavirus. The sad policy question is: How many lives have been lost because of his belief in the deep state?

Compelling and timely.... The issues raised by In Deep are particularly urgent.

A smart and terrific history of the suspicion between presidents and the governments they preside over, leading to the furious climax we see now with Trump.
— Peter Baker, Chief White House Correspondent for The New York Times and MSNBC analyst

David Rohde has written a remarkable book that is both urgent reporting and sweeping history. He brings the same vitality and precision that animated his storied reporting on war zones to this portrait of the decades-long battle over the powers of the intelligence community, and the erosion—under recent administrations of both parties—of rules put in place to protect American citizens’ rights. And he brings fresh insight to the phrase ‘deep state,’ and the role it may play in the future of American politics.
— Ronan Farrow, author of Catch and Kill

One of today’s most respected journalists, David Rohde takes on one of the country’s most toxic conspiracy theories—the claim that a secret cabal of insiders in Washington is thwarting the Trump presidency. Scrupulously reported and even-handed, In Deep goes deep indeed inside America’s security state, telling a story that will surprise readers of all political persuasions.

David Rohde, one of the best investigative reporters of his generation, brings together revelatory history and original analysis to the central drama of the Trump presidency. What I admire most is his fair-mindedness about pressing and controversial issues that have caused many others to lose their heads.
— George Packer, author of The Unwinding and Our Man

In Deep is a compassionate critique of the simmering grievance that has now found its way to the White House, where it threatens to upend the tenets of American democracy: truth, justice, and, above all, the rule of law. Reported in stunning and tenacious detail, In Deep is a wholly satisfying read—and a necessary one for anyone wanting to understand the forces at play in our government today.

Rohde skilfully makes clear that it is precisely by pedalling the myth of the Deep State that the President has been able to undermine efforts at oversight.
— Lawrence Douglas - Times Literary Supplement