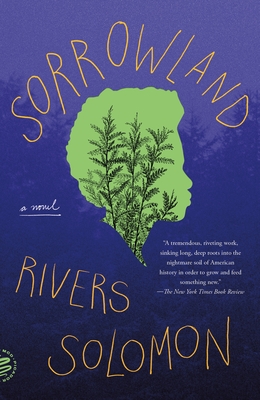 This story hits the ground running and doesn't let up until the very end. Vern's isolated upbringing launches her into a journey of epic proportions that she never wanted to be a part of. Solomon effortlessly weaves the less than savory history of the United States into every corner of this book, and I'm inclined to say that this has a very high chance of becoming a classic sometime in the not too distant future.

“Vern is a captivating protagonist from page one: gritty, determined, flawed, clever, and resourceful. The story slowly fills in all the details of a life that wasn’t what it seemed, and offers an ending you can’t predict. Sorrowland is beautiful, ugly, engaging, and awe-inspiring.”
— Sydne Conant, A Room Of One's Own Bookstore, Madison, WI

The Stonewall Book Award winner of 2022

Named a Best Book of 2021 by NPR, The New York Public Library, Publishers Weekly and more!

A triumphant, genre-bending breakout novel from one of the boldest new voices in contemporary fiction.

Vern—seven months pregnant and desperate to escape the strict religious compound where she was raised—flees for the shelter of the woods. There, she gives birth to twins and plans to raise them far from the influence of the outside world.

But even in the forest, Vern is a hunted woman. Forced to fight back against the community that refuses to let her go, she unleashes incredible brutality far beyond what a person should be capable of, her body wracked by inexplicable and uncanny changes.

To understand her metamorphosis and to protect her small family, Vern has to face the past and, more troublingly, the future—outside the woods. Finding the truth will mean uncovering not only the secrets of the compound she fled but also the violent history of America that produced it.

Rivers Solomon’s Sorrowland is a genre-bending work of gothic fiction. Here, monsters aren’t just individuals but entire nations. This is a searing, seminal book that marks the arrival of a bold, unignorable voice in American fiction.

Rivers Solomon writes about life in the margins, where they are much at home. In addition to appearing on the Stonewall Honor List and winning a Firecracker Award, Solomon's debut novel An Unkindness of Ghosts was a finalist for a Lambda, a Hurston/Wright, an Otherwise (formerly Tiptree) and a Locus award. Solomon's second book, The Deep, based on the Hugo-nominated song by Daveed Diggs-fronted hip-hop group clipping, was the winner of the 2020 Lambda Award and shortlisted for a Nebula, Locus, Hugo, Ignyte, Brooklyn Library Literary, British Fantasy, and World Fantasy award. Solomon's short work appears in Black Warrior Review, The New York Times, The New York Times Magazine, Guernica, Best American Short Stories, Tor.com, Best American Horror and Dark Fantasy, and elsewhere. A refugee of the Trans Atlantic Slave Trade, Solomon was born on Turtle Island but currently resides on an isle in an archipelago off the western coast of the Eurasian continent.

“Sorrowland is a tremendous, riveting work, sinking long, deep roots into the nightmare soil of American history in order to grow and feed something new.” —Amal El-Mohtar, The New York Times Book Review

"Sorrowland [is] a gothic techno-thriller in which the trauma of the past is parried with defiance and a thirst for understanding, as embodied by an electrifying young hero." —Hephzibah Anderson, The Guardian

“Sorrowland is a fully engrossing story that fully embraces its characters and beautifully engages with their lived experiences of gender, queerness, disability, racialization, power and corruption, and relationship with the land.” —Sarah Neilson, Shondaland

“Sorrowland is a powerful story about motherhood, survival, and the cruel treatment of Black bodies.” —Taiwo Balogun, Marie Claire

“Riveting and harrowing . . . This novel vividly portrays how Black bodies have been used for unethical experiments while it also celebrates queer love, motherhood, and vengeance. It’s gorgeously written and sure to be one of my favorite books of the year.” —Margaret Kingsbury, Buzzfeed

“A story you simply won’t see coming. You might think you’ve figured out the pillars of its structure after a few chapters, or come to truly understand its protagonist after walking a few dozen pages with her, but to read this powerful, moving and terrifying novel is to enter into a constant state of change. The story envelops you slowly, like a cocoon, wrapping you in its ever-increasing depth and heart until you emerge, at the end, transformed.” —Matthew Jackson, BookPage

“Solomon once again stretches the boundaries of speculative fiction in this distinct and visceral exploration of the trauma of Black and queer bodies in an all-too believable near future.” —Anna Mickelsen, Booklist

“Sorrowland by Rivers Solomon contains so much wisdom and insight, wrapped in an abundance of passion and fury and tenderness. This is the first book I've read in ages that I'm certain I will come back to again and again, because there are rich gorgeous passages that I already know will mean more to me on subsequent readings. There is so much going on in this book, too: the spectre of what happens when rebellion is co-opted, our longstanding practice of using Black bodies for cruel and unethical experiments, the audacity of queer love. The arc of this book takes Vern and her babies away from civilization and then back to it — but they return changed, and they change everyone else, and this book restored my faith in our potential to transform just when I needed it most.”—Charlie Jane Anders

"Sorrowland, from Rivers Solomon, is a fantastical, fierce reckoning. It is the story of Vern, a young girl fleeing the only life she has ever known, her abusive husband, the cult he leads, to create a life for herself and her babies. But the tentacles of Cainland, the home she left, are always following her as she grows into a young woman and something more, something terrifying and powerful that just might allow her to break free from all that haunts her. Sorrowland is gorgeous and the writing, the storytelling, they are magnificent. This country has a dark history of what it’s willing to do to black bodies and Rivers Solomon lays that truth bare in a most unexpected, absolutely brilliant way." —Roxane Gay

“Sorrowland delivers! Black Power cults. Government conspiracies. Post-Human transformations. A mother willing to defy everything and everyone—even nature itself—to protect her family. Rivers Solomon has once again created an engrossing, emotional, and original read with pages that demand to be turned. The writing is visceral and soul-clenching. The characters--bold, creative, and memorable. The action, heart-stopping. This is imaginative storytelling at its finest. Once I started, I could not put down Sorrowland until I reached the end. And then I wanted more!” —P. Djèlí Clark, author of Ring Shout

“Sorrowland is a wonderland of fantastical and frightening, magical and real, in a world refreshingly unlike ours, yet scarily the same. At the center of this world and leaping off the page is Vern: unstoppable, unforgettable, and unlike anyone you have ever seen before.”—Marlon James, author of Black Leopard, Red Wolf

“Sorrowland is a raw, powerful, and visceral read. With Vern, Rivers Solomon has created a woman who simply side-steps her damage, and level after level of difficulty—young, Black, queer, blind, alone in the woods with two newborns and pursued by monstrous government agents—to assume her own power. Nature, joy, science, belonging, human metamorphosis, generational oppression, strength, and sheer lust for life: if Toni Morrison, M. Night Shyamalan, and Marge Piercy got together they might, if they were lucky, produce something with the unstoppable exhilaration of this novel. Sorrowland is sui generis.” —Nicola Griffith

“Sorrowland is intense and raw. But in the end it was beautiful in a bittersweet way . . . This book should be read. It was truly spectacular.” —The Fantasy Inn