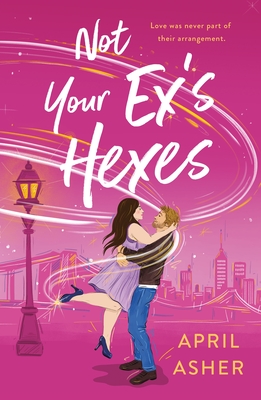 This is book number 2 in the Supernatural Singles series.

In April Asher’s next Supernatural Singles novel, Not Your Ex's Hexes, a one-night-stand between a willful witch and a broody half-demon conjures an adventure that wouldn’t be complete without several magical mishaps.

For her entire life, Rose Maxwell trained to become the next Prima on the Supernatural Council. Now that she’s stepped down, it’s time for this witch to focus on herself. And not think about her impulsive one-night stand with Damian Adams, a half-Demon Veterinarian who she can’t get out of her head. Neither of them is looking for a relationship. But when Rose is sentenced to community service at Damian’s animal sanctuary it becomes impossible for them to ignore their sparking attraction. A friends-with-benefits, no feelings, no strings arrangement works perfectly for them both.

After a sequence of dead-end jobs, it’s not until Rose tangos with two snarly demons that she thinks she’s finally found her path. However, this puts Damian back on the periphery of a world he thought he left behind. He doesn’t approve of Rose becoming a Hunter, but if there's one thing he's learned about the stubborn witch, it was telling her not to do something was one sure-fire way to make sure she did.

Working—and sleeping—together awakens feelings Damian never knew he had...and shouldn't have. Because thanks to his ex's hex, if he falls in love, he'll not only lose his heart—but his humanity.

April Asher, aka April Hunt, was hooked on romantic stories from the time she first snuck a bodice-ripper romance out from her mom's bedside table. She now lives out her own happily-ever-after with her college-sweetheart husband, their two children, and a cat who thinks she's more dog—and human—than feline. By day, April dons dark blue nursing scrubs and drinks way too much caffeine. By night, she still consumes too much caffeine, but she does it with a laptop in hand, and from her favorite side of the couch.

From the far left cushion, April Asher pens laugh-out-loud romantic comedies with a paranormal twist, but when she’s not putting her characters into embarrassing situations with supernatural entities, she also writes high-octane romantic suspense as April Hunt, her thrill-seeking alter ego who has written the Alpha Ops and Alpha Security series.