Sands of Dune: Novellas from the Worlds of Dune (Hardcover) 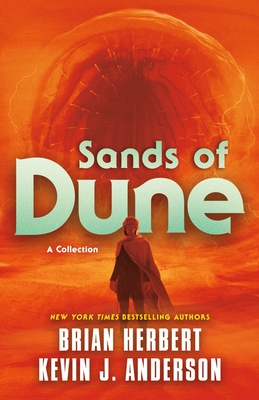 This is book number 11 in the Dune series.

Collected for the first time, these Dune novellas by bestselling authors Brian Herbert and Kevin J. Anderson shine a light upon the darker corners of the Dune universe. Spanning space and time, Sands of Dune is essential reading for any fan of the series.

The world of Dune has shaped an entire generation of science fiction. From the sand blasted world of Arrakis, to the splendor of the imperial homeworld of Kaitain, readers have lived in a universe of treachery and wonder.

Now, these stories expand on the Dune universe, telling of the lost years of Gurney Halleck as he works with smugglers on Arrakis in a deadly gambit for revenge; inside the ranks of the Sardaukar as the child of a betrayed nobleman becomes one of the Emperor’s most ruthless fighters; a young firebrand Fremen woman, a guerrilla fighter against the ruthless Harkonnens, who will one day become Shadout Mapes.

Praise for the Dune series:
“The magic lingers, even when the final chapters have already been written.” —Kirkus Reviews on Mentats of Dune

“[A] fun blend of space opera and dynastic soap opera.” —Publishers Weekly on Sisterhood of Dune

“Delivers solid action and will certainly satisfy.” —Booklist on The Winds of Dune

“The saga continues to embroider the original works with intelligence and imagination and also a stronger role for women.” —Booklist on Mentats of Dune

“Fans of the original Dune series will love seeing familiar characters, and the narrative voice smoothly evokes the elder Herbert's style.” —Publishers Weekly on The Winds of Dune

“This sequel to Paul of Dune is an important addition to the Dune chronology and will be in demand by Herbert fans.” —Library Journal, starred review, on The Winds of Dune

“Characters and plot are thus beautifully set up, the timing is precise...the universe...is so vast, complex and fascinating that the magic lingers.” —Kirkus Reviews on Sisterhood of Dune