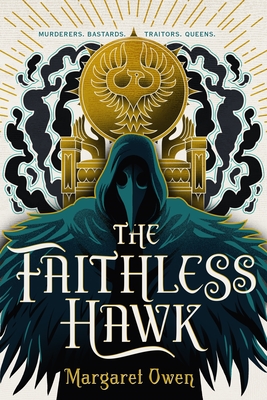 This is book number 2 in the The Merciful Crow Series series.

Kings become outcasts and lovers become foes in The Faithless Hawk, the thrilling sequel to Margaret Owen's The Merciful Crow.

As the new chieftain of the Crows, Fie knows better than to expect a royal to keep his word. Still she’s hopeful that Prince Jasimir will fulfill his oath to protect her fellow Crows. But then black smoke fills the sky, signaling the death of King Surimir and the beginning of Queen Rhusana's merciless bid for the throne.

With the witch queen using the deadly plague to unite the nation of Sabor against Crows—and add numbers to her monstrous army—Fie and her band are forced to go into hiding, leaving the country to be ravaged by the plague. However, they’re all running out of time before the Crows starve in exile and Sabor is lost forever.

A desperate Fie calls on old allies to help take Rhusana down from within her own walls. But inside the royal palace, the only difference between a conqueror and a thief is an army. To survive, Fie must unravel not only Rhusana’s plot, but ancient secrets of the Crows—secrets that could save her people, or set the world ablaze.

Margaret Owen was born and raised at the end of the Oregon Trail and has worked in everything from thrift stores to presidential campaigns. The common thread between every job can be summed up as: lessons were learned. She now spends her days writing and negotiating a long-term hostage situation with her two monstrous cats. She is the author of the Merciful Crow series. In her free time, she enjoys exploring ill-advised travel destinations and raising money for social justice nonprofits through her illustrations. She resides in Seattle, Washington.

"Owen’s fledgling chief and her Crow family stay on the move in this action-oriented sequel [and] the tension only escalates as the story advances... swift and unexpected turns propel it forward breathlessly." —Booklist

Praise for The Merciful Crow:

"One of the most exciting, exceptionally crafted fantasy debuts I've ever read. I did not want to leave this world! Absolutely breathtaking." —Claire Legrand, New York Times–bestselling author of Furyborn

"Packed to the teeth with fresh worldbuilding and righteous fury . . . It's a ride that is wildly fun." —Emily A. Duncan, New York Times–bestselling author of Wicked Saints

"The Merciful Crow is an intense, romantic adventure with unforgettable magic and a ferocious heroine I'd gladly follow down a long, dark road." —Tessa Gratton, author of The Queens of Innis Lear

"A passionate blend of adventure and intrigue wrapped around strong worldbuilding . . . Memorable and filled with diverse characters with fluid sexualities and identities." —Publishers Weekly, starred review

"Elevated by a fresh dialect-tinged voice and creative world-building that calls to mind issues of today." —Booklist