Thin Places: Essays from In Between (Paperback) 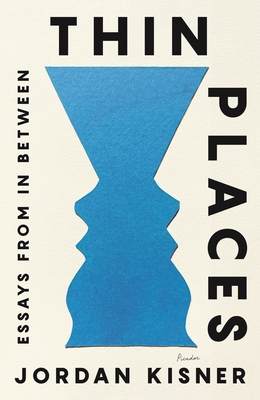 In this perceptive and provocative essay collection, an award-winning writer shares her personal and reportorial investigation into America’s search for meaning

When Jordan Kisner was a child, she was saved by Jesus Christ at summer camp, much to the confusion of her nonreligious family. She was, she writes, “just naturally reverent,” a fact that didn’t change when she—much to her own confusion—lost her faith as a teenager. Not sure why her religious conviction had come or where it had gone, she did what anyone would do: “You go about the great American work of assigning yourself to other gods: yoga, talk radio, neoatheism, CrossFit, cleanses, football, the academy, the American Dream, Beyoncé.”

A curiosity about the subtle systems guiding contemporary life pervades Kisner’s work. Her celebrated essay “Thin Places” (Best American Essays 2016), about an experimental neurosurgery developed to treat severe obsessive-compulsive disorder, asks how putting the neural touchpoint of the soul on a pacemaker may collide science and psychology with philosophical questions about illness, the limits of the self, and spiritual transformation. How should she understand the appearance of her own obsessive compulsive disorder at the very age she lost her faith?

Intellectually curious and emotionally engaging, the essays in Thin Places manage to be both intimate and expansive, illuminating an unusual facet of American life, as well as how it reverberates with the author’s past and present preoccupations.

Jordan Kisner's writing has appeared in n+1, The New York Times Magazine, The Atlantic, GQ, The Guardian, The American Scholar, California Sunday, The New Yorker, The New Republic, New York magazine, Pop-Up Magazine, and Pitchfork, among other publications. Her work has received a Pushcart Prize and was selected for The Best American Essays 2016. The author of Thin Places: Essays from In Between, she teaches creative writing at Columbia University.

"Kisner displays an impressive range of narrative modes in [Thin Places], bouncing nimbly between gravity (in her ethnography and her bird’s-eye philosophizing) and comic relief, which she peppers in just when our heads are starting to spin . . . In 'The Other City,' about the months she spent reporting on death investigations and autopsies in Cleveland, Kisner writes: 'Leaving the office every night, I’d get breathless rushes of reality.' That’s a lot like what these essays feel like, too: reminders of the weird in-between feeling of being alive." —Lauren Christensen, The New York Times Book Review

"With this collection, [Jordan Kisner] takes her place among the next generation of American Transcendentalists, and those true essayists for whom nothing human is too strange to write about . . . She’s one of the few contemporary writers who knows how to bridge spiritual and temporal worlds, but who’s also able to alter and expand our understanding of the metaphors we live by through immersive research and writing. Reading [Kisner], I always feel my horizons and sense of the world expanding.” —Marco Roth, n+1

"Fiercely intelligent and consistently edifying . . . What makes this collection so compulsively readable is Kisner’s ability to wield her contagious curiosity and nose for objective reporting to investigate everything from a once bustling, now mostly abandoned lakeside oasis in Southern California ('Good Karma'), to Ann Hamilton’s magical and enveloping multimedia installation at New York’s Park Avenue Armory in 2012 ('The Big Empty'), to evangelical robocalls ('Phone Calls From the Apocalypse') . . . Kisner is one of the most perceptive, open-minded and capable literary tour guides I’ve encountered in quite some time, and I’m already looking forward to her next (ad)venture." —Alexis Burling, San Francisco Chronicle

"Reading Thin Places I was reminded of Oliver Sacks’ elucidating essays, which unfold in the maze of existence. Jordan Kisner’s essays from in between also escort us on an informed and elegant journey." —Sarah Sarai, Lambda

"With humor and razor-sharp insight, Jordan Kisner’s Thin Places: Essays From in Between captures the visceral, palpable feeling of loss . . . Kisner weaves together reflections on Kierkegaard, her early Christian conversion (and later 'unconversion') and waiting for the subway to gracefully guide us through our own emptiness in search of fullness." —Henry Carrigan, BookPage (starred review)

"With its tales of high art, reality TV, and anti-Trump Mormon bloggers, [Thin Places] couldn't be more timely . . . Whether you're a practicing member of a faith community, lapsed, converted, excommunicated, or just a lifelong skeptic, you'll find something to enjoy in Jordan Kisner's first book." —The Bustle

"The fluidity of Kisner’s essays in her debut book, Thin Places, is arguably the most striking thing about this collection. Kisner seems to effortlessly move from research to personal memoir to social commentary . . . [it's] as if each essay is stretching its fingers into the next . . . a nod to the magic of Kisner’s careful layering. This debut collection marks Kisner as a voice to listen to." —Rachel Léon, Chicago Review of Books

"A neatly poised, sympathetic, and refreshingly unpreachy collection . . . The prose throughout is by turns lyric and clear, meditative and reportorial—a combination that suits the equal importance she puts on search and on meaning itself . . . [These] essays are as entertaining as they are eye-opening." —Publishers Weekly

"Astute, perceptive forays into America’s nooks and crannies . . . As a good reporter, [Kisner] never judges the people she writes about, often finding common ground . . . Thoughtful, engaging, and informative essays from a writer to watch” —Kirkus

"Great writing begins not with the voice but with the eyes. Jordan Kisner has piercing vision, and she sees herself as keenly as she observes the teeming, chaotic world around her. She has a powerful voice, too, dispassionate and rhapsodic in equal measure. What results is a woundingly relevant book about American dreams and madness in the early twenty-first century." —Alex Ross, author of The Rest Is Noise and Listen to This

“Jordan Kisner’s essays are like intricate tattoos: etched with a sharp and exacting blade of intellect, but made of flesh; richly drawn in their details; comprised of equal parts pleasure and pain. Like tattoos, their natural habitat is that strange borderland where our skin meets the world—where we confront our edges, or everything we can’t keep out. Always, and thrillingly, they look inward and outward with exacting grace." —Leslie Jamison, author of The Empathy Exams

"These singular 'encounters with the ineffable' are full of risk and daring, urgency and contact. They confront species of belief head-on without relinquishing doubt. Beautifully lyrical and observant, Kisner's fresh voice speaks with uncanny consolation to this extreme, seemingly apocalyptic moment." —Phillip Lopate, author of Portrait Inside My Head

"Jordan Kisner is a pilgrim for our times. She ventures into the operating room where a surgeon inserts an electrode into a patient’s brain. She mingles with the debutantes of Laredo, Texas as they navigate the fraught space between Wasp and Hispanic privilege. Wherever she is, Kisner probes the ambiguities that we live and dream, exploring the spaces where, in her words, 'Distinctions between you and not-you, real and unworldly, fall away.' She is a tender but fierce writer; rigorous and wise." —Margo Jefferson, author of Negroland: A Memoir

"Jordan Kisner’s essays are a bewitchingly original and highly personal synthesis of incisiveness, gracefulness, thoughtfulness, and selflessness. She is an intellectual empath with the deepest moral instincts and a willingness to consider herself alongside her subjects, as a person no more or less worthy of attention. Her work gives me the feeling that I’m being told an urgent secret about humanity that is meant to be savored, then shared." —Heidi Julavits, author of The Folded Clock

"Jordan Kisner sees reality with a telescopic, infrared focus uniquely suited to illuminating the hidden, forgotten, or obscured nooks of our cultural moment, excavating the longings and unspoken affinities that lie just beneath the surface. With revelatory grace and insight, these essays refract the world you might think you know in a new and brilliant light." —Alexandra Kleeman, author of You Too Can Have a Body Like Mine