Bring Me Back: A Novel (Mass Market) 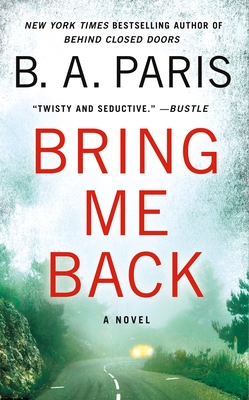 “A dark, mysterious thriller, Paris’ latest novel demands to be binge-read. Through seamless transitions between past and present, the reader learns the ever-darkening love story of Finn and Layla. Fast enough to keep you reading but slow enough to keep you guessing, Paris carefully reveals secrets that build new theories as quickly as they destroy others. Paris is smart, knowing exactly what to tell you to make you believe that you’re ahead before you realize you’re actually three steps behind. A mystery that keeps you guessing until the end, filled with the ominous imagery of Russian nesting dolls, Bring Me Backis destined to be a hit.”
— Levi Arney, Austy's, Salem, IN

THE TWISTY, GRIPPING READ FROM B.A. PARIS, THE AUTHOR OF THE INSTANT NEW YORK TIMES AND USA TODAY BESTSELLING NOVELS BEHIND CLOSED DOORS AND THE BREAKDOWN

“We’re in a new Golden Age of suspense writing now, because of amazing books like Bring Me Back, and I for one am loving it.” —Lee Child

She went missing. He moved on. A whole world of secrets remained—until now.

Finn and Layla are young, in love, and on vacation. They’re driving along the highway when Finn decides to stop at a service station to use the restroom. He hops out of the car, locks the doors behind him, and goes inside. When he returns Layla is gone—never to be seen again. That is the story Finn told to the police. But it is not the whole story.

Ten years later Finn is engaged to Layla’s sister, Ellen. Their shared grief over what happened to Layla drew them close and now they intend to remain together. Still, there’s something about Ellen that Finn has never fully understood. His heart wants to believe that she is the one for him...even though a sixth sense tells him not to trust her.

Then, not long before he and Ellen are to be married, Finn gets a phone call. Someone from his past has seen Layla—hiding in plain sight. There are other odd occurrences: Long-lost items from Layla’s past that keep turning up around Finn and Ellen’s house. Emails from strangers who seem to know too much. Secret messages, clues, warnings. If Layla is alive—and on Finn’s trail—what does she want? And how much does she know?

A tour de force of psychological suspense, Bring Me Back will have you questioning everything and everyone until its stunning climax.

B.A. PARIS is the New York Times and internationally bestselling author of Behind Closed Doors, The Breakdown, Bring Me Back, The Dilemma, and The Therapist. Having lived in France for many years, she and her husband now live in the UK. She has worked both in finance and as a teacher, and she has five daughters.

Praise for Bring Me Back:

Named one of Good Morning America's "Best Books to Bring to the Beach This Summer" on GoodMorningAmerica.com!

A Bustle Best Books of the Week pick

"Outstanding Hitchcockian thriller...Paris plays fair with the reader as she builds to a satisfying resolution. Fans of intelligent psychological suspense will be richly rewarded.” —Publishers Weekly (starred and boxed)

“A twisty and seductive new psychological thriller you won't want to miss.” —Bustle

“B.A. Paris is back with another twisted psychological thriller.” —The Daily Beast

“B.A. Paris is a consistent whiz at stitching any number of random events and devious characters into a winner of a plot.” —Toronto Star

Praise for the Breakdown:

“A story with a ratcheting sense of unease—a tale of friendship and love, sanity and the terrible unravelling of it.” —USA Today

“This novel that will keep you on the edge of your seat from page one.” —Book Trib, "Top 10 July Reads"

“B. A. Paris has done it again! The Breakdown is a page-turning thriller that will leave you questioning the family you love, the friends you trust, and even your own mind.” —Wendy Walker, author of the USA Today bestselling novel All Is Not Forgotten

“In the same vein as the author’s acclaimed debut, Behind Closed Doors, this riveting psychological thriller pulls readers into an engrossing narrative in which every character is suspect. With its well-formed protagonists, snappy, authentic dialog, and clever and twisty plot, this is one not to miss.” —Library Journal (starred)

“This psychological thriller is even harder to put down than Paris’ 2016 bestselling debut Behind Closed Doors; schedule reading time accordingly....A skilfully plotted thriller. With two in a row, Paris moves directly to the thriller A-list.” —Booklist (starred)


Praise for Behind Closed Doors:

AUGUST 2016 INDIE NEXT PICK!
BEHIND CLOSED DOORS has been selected for the 2016August LibraryReads list!
REAL SIMPLE chose it as “Best Book of the Month” for August


“Hair-raising...Behind Closed Doors is both unsettling and addictive, as I raced through the pages to find out Grace’s fate. A chilling thriller that will keep you reading long into the night.” —Mary Kubica, New York Times and USA Today bestselling author of The Good Girl

“Newlyweds Grace and Jack Angel seem to lead a perfect life in British author Paris’s gripping debut, but appearances can be deceiving...Grace’s terror is contagious, and Millie’s impending peril creates a ticking clock that propels this claustrophobic cat-and-mouse tale toward its grisly, gratifying conclusion.” —Publishers Weekly

“Making her smash debut, Paris [keeps] the suspense level high. In the same vein as Gone Girl or Girl on the Train, this is a can’t-put-down psychological thriller.” —Library Journal (starred review)

“Debut-novelist Paris adroitly toggles between the recent past and the present in building the suspense of Grace’s increasingly unbearable situation, as time becomes critical and her possible solutions narrow. This is one readers won’t be able to put down.” —Booklist (starred review)

“A frighteningly cool portrait of a serious sadist, Behind Closed Doors is a gripping, claustrophobia-inducing thriller... Read at the risk of running from every handsome British lawyer who crosses your path.” —Romantic Times

“B.A. Paris’s debut, Behind Closed Doors, is a chilling confirmation of the adage that no one ever really knows what transpires in other people's private lives....Paris has created one of the most heinous villains in recent memory, upon whom even the most pacifist of readers might wish torturous revenge. They’ll likely remain behind their own closed doors as they race through this thriller to see how, or if, the nightmare ends.” —Shelf Awareness

“A gripping domestic thriller…the sense of believably and terror that engulfs Behind Closed Doors doesn't waver.” —The Associated Press, picked up by The Washington Post

“If you’re hunting for a thriller to give you chills in August, look no further than this book, which is already a big hit in the U.K.” —Real Simple magazine

“Behind Closed Doors takes a classic tale to a whole new level…This was one of the best and [most] terrifying psychological thrillers I have ever read…each chapter brings you further in, to the point where you feel how Grace must feel. The desperation, the feeling that no one will believe you and yet still wanting to fight because someone you care deeply about will get hurt.” —San Francisco Book Review

“Paris grabs the reader from the beginning with a powerful and electrifying tale. Behind Closed Doors, a novel sure to make one's skin crawl, also reveals no one truly knows what does go on behind closed doors.”—New York Journal of Books

“B. A. Paris takes the cliché about not knowing what goes on beyond closed doors to a nightmarish place....Each chapter escalates the tensions and stakes faced by Grace in the nightmare that is her new ‘perfect’ marriage to Jack.” —Huffington Post

“This debut is guaranteed to haunt you — especially if you’re about to tie the knot. Paris’s thriller asks the question: ‘The perfect marriage or the perfect lie?’ Jack and Grace, the couple at the center of this totally enthralling novel, are so clearly not what they seem you’ll have no choice but to read and read and read until their darkest secrets are revealed. Warning: brace yourself.” —Bustle (10 New Thrillers to Read This Summer)

“This dark and twisted thriller will keep you on your toes and have you wondering exactly what goes on behind your neighbor’s door.”—Buzzfeed (“6 Thriller/Mystery Reads That Will Have You Sleeping With the Lights On”)

“Really freaking creepy. And really good. Until the end, which was an honest gasp and imaginary pearl clutching moment. Yes, that good. Reader, if you want to read the thriller that enthralled even this jaded soul, pick up Behind Closed Doors by BA Paris....Then draw the blinds and turn off your phone because you will not want any interruptions.”—LitHub (“18 Books You Should Read This August”)

“This book proves that looks are most definitely deceiving…Disturbing, to say the least, readers will definitely be shaken as the story commences and they become immediately absorbed. The writing was incredible, and the pace is quick, offering up too many chills to count…Behind Closed Doors screams: ‘Stay single!’” —Suspense Magazine

“The book dishes out endless tension [and] much creepiness.” —Toronto Star